Helio Castroneves took victory at the 105th running of the historic race at the Indianapolis Motor Speedway as the venue hosted the largest crowd since the coronavirus pandemic began. 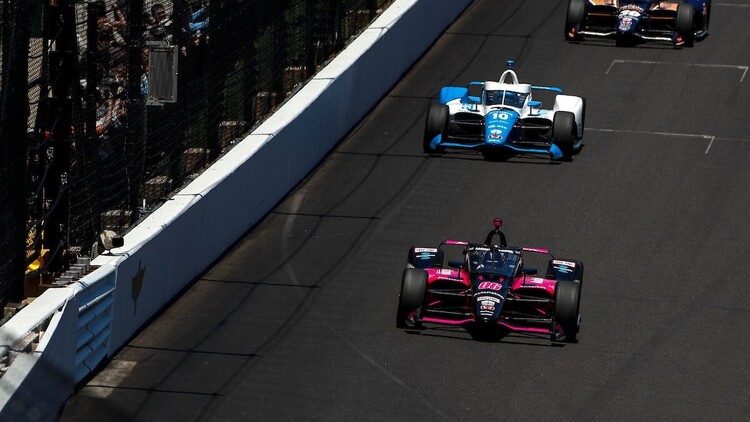 Meyer Shank Racing driver Helio Castroneves took his fourth win at the 2021 Indy 500, edging out Alex Palou in a close race which remained all to play for into the final laps.

The race marked the return of the largest live crowd since the beginning of the coronavirus pandemic, with 135,000 filling the Indianapolis Motor Speedway to watch Castroneves take victory.

The 46 year-old Brazlian driver had battled with Palou for a large section of the race as it headed into its final stretches, swapping the lead in between pit stops but neither managing to pull a significant gap to the other.

Young Spanish driver Palou led for a large portion in the middle section of the race for Chip Ganassi Racing, leading the field ahead of Castroneves and Pato O’Ward with just one pit stop remaining as the drivers fought to save fuel for the run into the line.

With three laps to go however, Castroneves managed to pass Palou on the outside coming out of Turn 1 and was able to navigate the traffic of lapped cars to take his fourth victory at the Indianapolis Motor Speedway.

In a cagey race, the first pit stop cost both polesitter Scott Dixon and Alexander Rossi dearly, as both suffered issues with the former struggling to start his car, causing them both to lose a lap which they wouldn’t recover until the last third of the race. Dixon ultimately finished the race in 17th, while Rossi was back in 29th.

Stefan Wilson had to retire his Andretti Steinbrenner Autosport car after he was unable to slow it down on entry to the pitlane on lap 25 and lost control under braking, spinning his car into the wall and bringing out the caution as the pitane was blocked.

The 2018 Indy 500 winner Will Power had a similar incident in the last quarter of the race, his Team Penske car turning backwards in the pitlane and seeing him drop down the running.

Graham Rahal crashed out of the race just after the halfway mark as he completed his third pit stop, with the failure to fully secure his left rear wheel causing it to pop off as the driver exited the pitlane, causing him to slam into the wall.

The wheel bounced over the cockpit of hometown hero Conor Daly, instead causing damage to the front wing of his Ed Carpenter Racing car after he had led for more than 30 laps to a warm welcome from the crowd earlier in the race.

Daly’s teammate Rinus VeeKay had shot to the front of the pack after beating Colton Herta and Dixon within the first few laps to the lead, the young Dutchman in the Bitcoin-livery car taking advantage to be the first to pull into the pits.

However, VeeKay and Daly were unable to sustain their earlier advantage at the front of the pack and ultimately finished in eighth and 13th.