Brundle: Abu Dhabi GP should have been red flagged

Formula 1 pundit Martin Brundle feels that the Abu Dhabi GP should have been stopped to make the end of the race more fair. 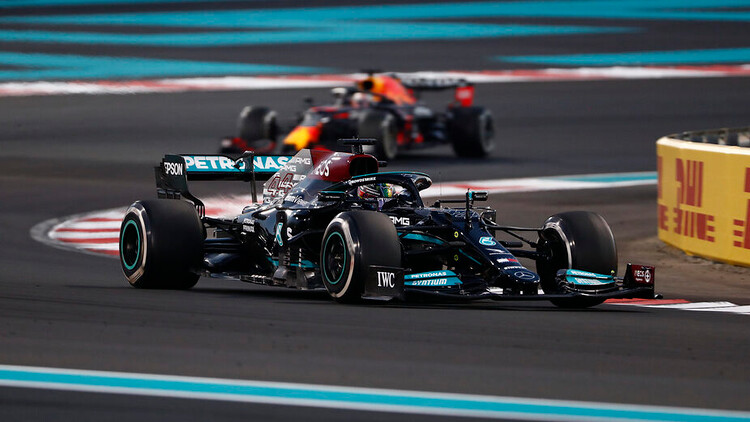 Formula 1 pundit Martin Brundle believes that the Abu Dhabi Grand Prix should have been red flagged following Nicholas Latifi's crash in the latter stages of the race.

Latifi's accident brought out the Safety Car, which enabled Max Verstappen to pit for Soft tyres whilst Lewis Hamilton opted to stay out on his old, Hard tyres, ahead of a potential restart.

The decision to only let the five cars in between race leader Hamilton and Verstappen unlap themselves was highly controversial as it put the championship protagonists nose to tail for the final lap of the race.

Verstappen used his fresher rubber to overtake Hamilton at Turn 5 and fended him off for the remainder of the lap to become the World Champion.

"In hindsight, this should have been a red flag so that everyone could reset, the track could be cleared, and we'd have a straight final championship duel on matching tyres from a standing start," Brundle wrote in his column for Sky Sports.

"However, that would set a precedent for more red flags in the future. As potentially could have happened back in Azerbaijan, we don't want a race, and so championship, finishing with the cars lined up stationary in the pit lane.

"There are just under one thousand five hundred words in the Sporting Regulations defining the full Safety Car procedure including letting lapped cars through. Once cars inevitably start pitting, especially the leaders, it's not entirely straightforward to establish who is actually a lap down.

"Meanwhile, the Race Director [Michael Masi] must manage the incident on track with safety as a priority, attend to the pit wall lobbying from teams demanding to control what happens next or to find out if they can unlap themselves, gather up the cars still in the race, and restart as soon as possible.

"This regulation was introduced long ago to make sure lapped cars didn't get in the way of a leading battle."

Mercedes lodged two protests in Abu Dhabi, with both dismissed by the stewards in the hours following the race.

However, they indicated an intention to appeal the protest regarding the race classification due to how the Safety Car withdrawal was handled.

Hamilton had dominated the race up until the last lap and Brundle thinks Mercedes will feel that the Safety Car should not have come in before the start of the final lap.

"Nobody wants to see a Safety Car finish to any GP, but there's a procedure laid out where on the last lap the Safety Car can take to the pit lane and without any further overtaking the field can take the chequered flag," said Brundle.

"This generates all the right images without a road car with flashing lights apparently winning the race. Masi understandably didn't want to release the lapped cars until the track was clear of the crashed car, a recovery vehicle, and people.

"The last two aspects will rightly forever be sensitive topics in motorsport. It's optional whether it's deemed safe enough to let lapped cars unlap themselves, of course a Safety Car always means either an accident, track debris, or heavy rain, but the regulations say 'any lapped cars' and not 'all'.

"Cue the lawyers as just the key five were waved through to put Verstappen directly behind and even alongside Hamilton for the last lap charge. Mercedes will forever feel that the last lap was duty bound to be behind the Safety Car."

"I'm not going to make any accusations"

Masi has come under severe scrutiny in the aftermath of the Abu Dhabi GP due to the circumstances which took place in the closing laps.

Mercedes Team Principal Toto Wolff slammed the decision to restart the race, claiming that it "wasn't right". Masi said "it was a motor race" and F1 "went car racing".

Brundle stayed away from blaming Masi for his decisions.

"I'm not going to make any accusations here whatsoever that there was any malice or intent in those decisions and actions, because I have zero evidence or expectations in that respect, and you've all made your minds up anyway," continued Brundle.

"I can understand why Mercedes and team Hamilton feel aggrieved, just as Red Bull would have done if the race finished behind the Safety Car.

"Talk about being between rock and a hard place."