Toto Wolff has made light of the potential for more first-lap drama at the Hungarian Grand Prix following the controversial incident between Lewis Hamilton and Max Verstappen at Silverstone. 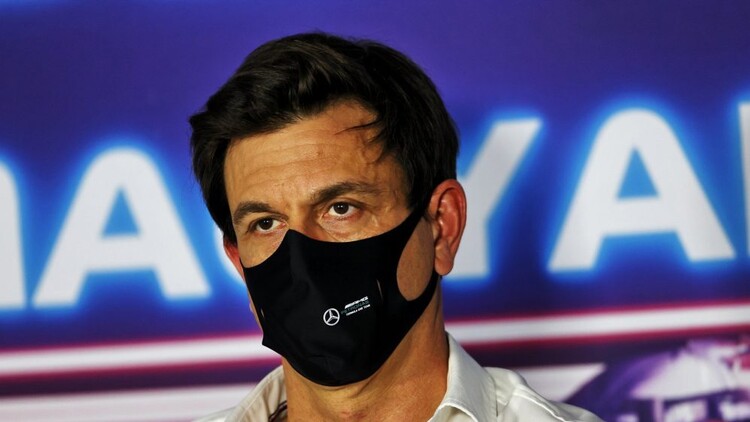 Toto Wolff has joked that the Mercedes and Red Bull cars could find themselves out before the first corner of the Hungarian Grand Prix after what controversially happened during the opening lap at Silverstone.

Lewis Hamilton and Max Verstappen had a now infamous collision before the first lap of the British Grand Prix had been completed, resulting in Verstappen crashing out whilst Hamilton received a 10-second penalty for his part in the incident, though went on to win the race.

There appears to have been some lasting tension from this; Red Bull failed in an appeal attempt to have the crash revisited by the stewards, whilst Hamilton received boos from some of the crowd after securing pole in qualifying at the Hungaroring. With Mercedes pair Hamilton and Valtteri Bottas sharing the front row - and Verstappen and Red Bull teammate Sergio Perez sitting in third and fourth - Wolff is aware that there could be drama, all of which could be a good thing for fifth-placed Pierre Gasly...

"Let's see what happens tomorrow," Wolff told Sky Sports F1. "I think it's going to be an exciting start.

"Maybe Gasly leads after Turn 1, and all four cars are somewhere out. No, just joking but not! But it will be an exciting Turn 1 and for sure on the strategy we will see some interesting manoeuvres."

The Mercedes cars were the only ones in the top 10 to opt for the medium tyre rather than the soft, which could see some variations in strategy.

However, when it comes to how to approach Turn 1, Wolff insists he will not be trying to give Hamilton and Bottas any advice.

"If I start teaching my drivers about how to approach Turn 1, then it has actually completely gone off the rails," the Silver Arrows team principal quipped.