How Button's first F1 win brought so many to tears

Jenson Button had to wait 113 races before claiming his first win at the 2006 Hungarian GP. The Briton took the chequered flag for Honda, and explained just how important it was to the Japanese manufacturer. 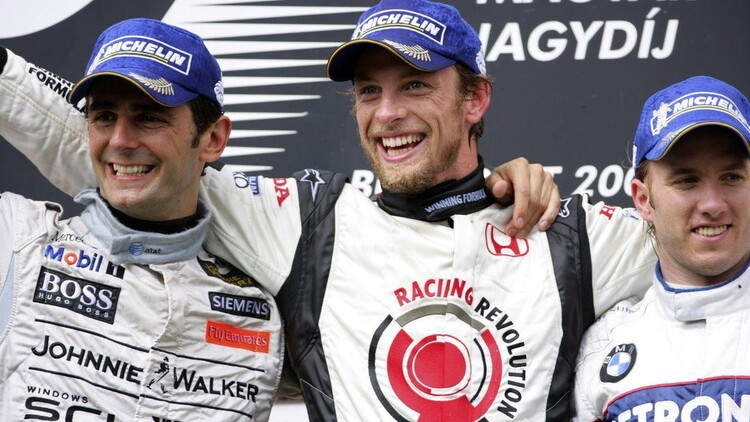 Jenson Button's first win at the 2006 Hungarian GP was certainly an emotional affair for the Briton, though it may have been an even bigger moment for Honda.

The race was run in cool and rainy conditions and saw Button pick up his first victory after 113 races while driving for Honda.

Speaking on The High Performance podcast, Button explained that the result was huge for Honda as well, who picked up their first win as a constructor since the 1967 Italian GP, and first as engine supplier since Gerhard Berger at the 1992 Australian GP.

"That weekend was pretty emotional because we had a great car in Hungary 2006 and Honda back then were very good with power output, but the reliability wasn't there," Button stated. "In practice, I was super quick, but we blew the engine on Saturday morning.

"I qualified fourth which I was pretty happy with, but back then you had a 10-place grid penalty for an engine failure so I started the race in 14th.

"Coming through in those tricky conditions and winning in that manner was massive for us. It's always exciting when you come through the field and win a race, it's great to watch and I think that just added to the excitement for the whole team.

"I've never seen so many grown men cry. The Japanese are so emotional about their motor racing and to finally get that win after so many years of trying really meant a lot to them, and also the UK-based team as well.

"[It was] a really special weekend and the funny thing is you celebrate and then it's forgotten."

Button explained that the result didn't change his mindset, though he believes it helped boost the team's confidence.

"I think as a whole, as a team, it probably did [help]," Button continued. "We were more confident turning up at the next race when it came to strategy and the pit-stops.

"There was more belief in us as a team than us as individuals. If you looked at that point to the end of the season we actually scored more points than Michael Schumacher and Fernando Alonso, the two guys that were fighting for the World Championship.

"So it definitely helped us have confidence to go out there and fight with the best of them."