VIDEO: Scary onboard video as tyre bounces across track during Indy 500

Conor Daly had a terrifying moment during Sunday's Indy 500, as a loose tyre bounced across the track in front of his car. 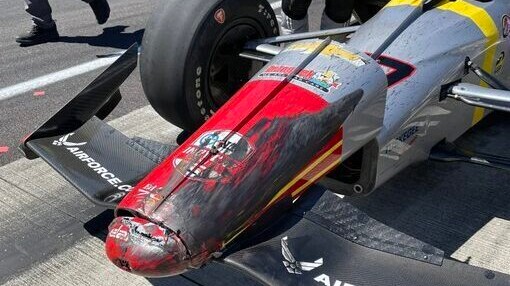 IndyCar's Conor Daly had a terrifying moment during the Indy 500, as he struck a tyre that was bouncing across the track.

Daly had been in contention for the race win when the early race leader came across Graham Rahal's crashed car. Rahal had spun out of the race and hit the barrier after a pitstop, due to a loose left rear wheel.

With Rahal's car in the wall, the tyre continued bouncing down the track and Daly was powerless to stop himself from driving into the errant wheel. Fortunately, the tyre struck the nosecone and Daly was able to continue with the aerodynamic damage taking him out of contention.

But the onboard shows just how scary the moment was and proves, once again, the value of the new protection device Aeroscreen really is.

Romain Grosjean, whose life was saved by a similar device in F1 when the Halo protected him from injury in the 2020 F1 Bahrain Grand Prix, isn't racing on IndyCar's ovals this year due to safety concerns and tweeted: "Thanks Aeroscreen !!! I was very stupid not to want the Halo or Aeroscreen to be brough fwd. I’ll never race a car without it anymore."

Check out the video below.