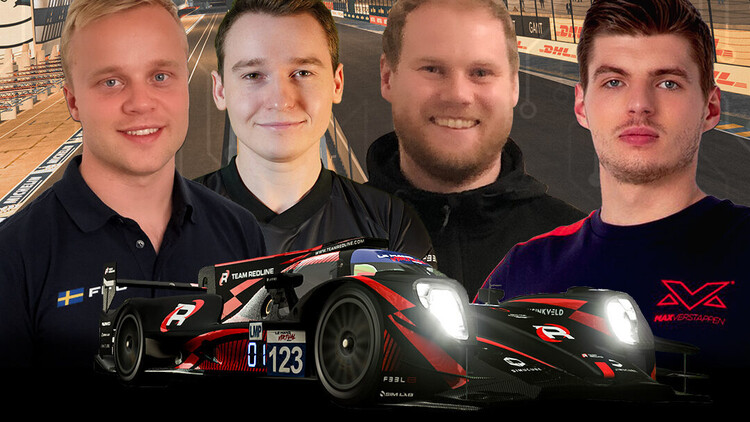 Max Verstappen "thinks like an engineer" in how he approaches setting up a car, whether it be a real or a virtual one, according to his Team Redline teammate Atze Kerkhof.

The Kerkhof/Verstappen duo are a formidable pairing in the sim racing world, and are aiming to get revenge this weekend for the server issues that stopped them from winning last year's 24 Hours of Le Mans Virtual.

Their Team Redline car will start this year's race from second on the grid, after Verstappen missed out on pole by just 0.002 seconds.

Speaking to RacingNews365.com ahead of the virtual endurance sim race, Kerkhof said that working with Verstappen is eye-opening for him.

Since Verstappen obviously has a particularly hectic life as a front-running F1 driver, it's up to Kerkhof to do a lot of the initial groundwork in his home sim for their car's entry.

"I did a lot of the basic work on the setup," he explained. "We do that together with the team, but that was on my plate as far as the drivers are concerned.

"Max steps in later and, as always, is immediately fast. That's when we dot the I's and cross the T's together."

Kerkhof to join Verstappen in the F1 paddock

Verstappen recently revealed how he feels sim racing has made him a better all-round racing driver, with Kerkhof saying his knowledge of how to set up a car is very evident.

"Max is someone who, like our engineers, knows the car through and through," he said.

"He thinks like an engineer and he drives like a World Champion. That is the ideal combination and as such, he can also provide feedback very quickly.

"He always finds a few tenths in the setup and that's really nice to have, because those are probably exactly the few tenths you need to make the gap, so we're really happy to have a guy like that in the team.

"He's a great ambassador for us, but also for sim racing that he openly talks about a lot."

Kerhof himself is taking a step back from sim racing after this weekend's 24 Hours of Le Mans Virtual, as real-world F1 duties beckon.

"This will be my last race for the time being," he said. "Next year I will be way too busy with other things.

"I will be present at all 23 Formula 1 Grands Prix as Alfa Romeo Driver Performance Consultant. I will remain busy as Team Redline Team Manager and I still run my own company Adrenaline Control.

"In addition, I'm still fast now, but I'm also getting a year older and I just notice that if I can't prepare well for such a race, if I can't test enough, I'm really a lot slower."

Interview
Watson understands Hamilton's silence: He was 'done out of' the championship
18 January 4:05PM
1 comment

Interview
Exclusive: Why Andretti feels Verstappen could be 'even better' in 2022
18 January 8:00AM
0 comments

Interview
Concerns within F1: Can the likes of Red Bull benefit from their sister teams?
16 January 12:30PM
0 comments

Interview
Norris on 'coincidence' that made McLaren seem less competitive by end of 2021
15 January 5:25PM
1 comment

Interview
Honda explain what they are aiming for with 2022 power unit
13 January 12:02PM
0 comments

Interview
Norris curious about 2022 cars: Everyone will have to change driving style
06 January 3:05PM
0 comments

Interview
Exclusive: McLaren tech boss on why the 2022 regulations are such a tough challenge
05 January 8:30AM
0 comments

Interview
Norris on moving to Monaco: Anyone in my position would do the same
04 January 2:58PM
0 comments