After seeing rival Lewis Hamilton clip the pit wall in Russian Grand Prix qualifying, Max Verstappen believes the Mercedes driver should have known how slippery the pit lane was by that point. 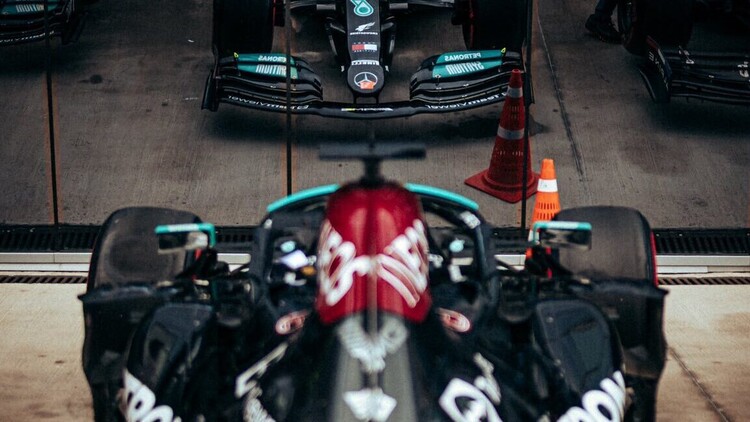 Max Verstappen couldn't help but take a slight dig at championship rival Lewis Hamilton after the Mercedes driver clipped the pit wall and damaged his front wing during qualifying for the Russian Grand Prix.

Lando Norris snatched pole position at the Sochi Autodrom, taking advantage of the drying track at the end of qualifying, in what was a surprise result considering Mercedes topped both practice sessions on Friday, along with Q1 and Q2.

However, things unravelled for the Silver Arrows in Q3, with Hamilton needing a new front wing after hitting the pit wall as he looked to make the switch to slicks.

Hamilton said he was "incredibly disappointed" with the mistake, and his spin on the subsequent lap, with Verstappen happy to share his thoughts on the situation.

"You've done the pit entry a few times at that time, so I think you understand how slippery it is," Verstappen told RacingNews365.com and other members of the media

"I don't know what happened. I quickly saw the replay, so I haven't actually fully been watching it.

"Of course, it would be better not to make that mistake, but I guess he knows that himself as well."

Verstappen will start Sunday's race from the back of the grid after changing his Honda engine on Friday.

The Red Bull driver has vowed to do what he can to score as many points as possible, though he knows he needs a bit of help to make his way through the field.

It remains to be seen how much help teammate Sergio Perez can offer, as he was only able to qualify in P9, however Verstappen pointed out that the conditions in qualifying made it tricky for everyone.

"It also depends on the first lap, or things that happen during the race," Verstappen added. "Of course, I'll try to score points, but I need a bit of help.

"When you start from the back you need to do it on your own, so whatever happens at the front, I'm not involved with that. That qualifying was quite tricky, so it's never easy to make the right decision, as you can see."

Verstappen leads Hamilton by five points in the standings.