Verstappen: I didn't have the pace to challenge Bottas

Max Verstappen admitted that Mercedes were simply too quick as he settled for second position in the Turkish Grand Prix. 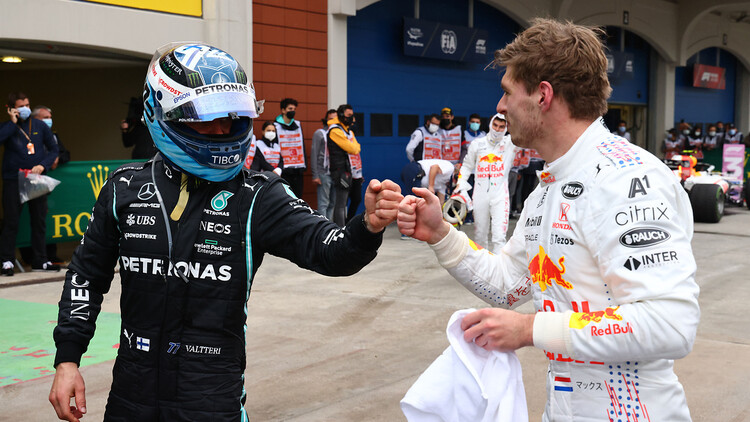 Max Verstappen felt there was "no need" to try to challenge Valtteri Bottas for victory in the Turkish Grand Prix, conceding that Mercedes were simply a step ahead of Red Bull this weekend.

Having led both of Friday's practice sessions at Istanbul Park, Mercedes claimed the top two positions in qualifying, before Lewis Hamilton dropped from first to 11th on the grid as a result of his engine penalty.

Verstappen therefore joined Bottas on the front row and, after slotting in behind the Finn at the start of the race, was unable to make any inroads during the 58-lap encounter in wet conditions.

"I mean, considering our whole weekend, being a bit off pace compared to Mercedes, I think we had quite a decent race," Verstappen told media, including RacingNews365.com.

"In the beginning, I just tried to follow Valtteri, but of course we had to manage the tyres, so I dropped back a bit.

"At one point, we started to pick up the pace a little bit, also because the track was drying a bit, but there was no point where I could attack Valtteri. He was managing his race also very well, and looking after his tyres."

Verstappen went on to describe the challenge of keeping his Intermediates in good shape.

He added: "At one point I said, 'Yeah, the tyes are pretty gone'. They were completely worn to slicks, so it was very tricky out there, when the track is like it was.

"We decided to box and then basically after the stop, 20 laps to go I think, I just decided to bring it home.

"Anyway, I didn't have the pace fight Valtteri, so there was also no need to try and be within two- or three-tenths, you know, to try and you follow him. I just saved the tyres to the end, basically."