Rossi keen to race with Norris after MotoGP retirement

Valentino Rossi is considering future options following his retirement from MotoGP, and this could involve competing in a race alongside Lando Norris. 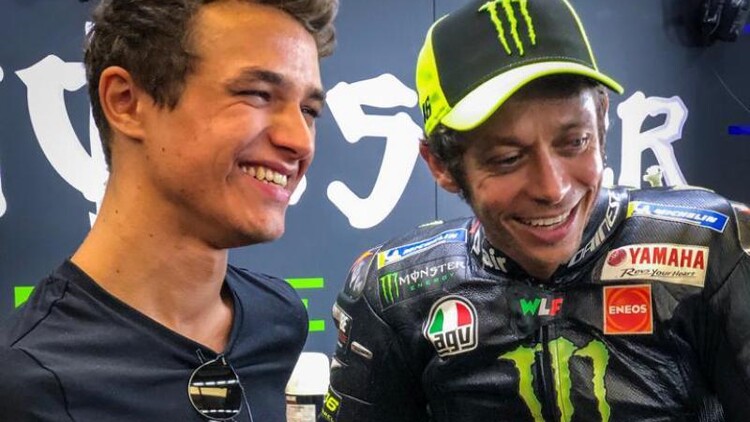 Valentino Rossi is keen to take part in a race with Lando Norris following his recent retirement from MotoGP.

The Italian legend of the sport recently competed in his last Grand Prix in Valencia, and will now be looking at his career options for the future. One possibility is the idea of racing with Norris, who has long been a big fan of Rossi.

"About racing together next year, for me it would be fantastic because Lando is so fast," Rossi told Motorsport.com.

"I will race in cars and, if I can do a race with Lando, for me it will be a great, great pleasure because he is very fast and we can enjoy for sure."

Norris recently spoke about a text exchange he shared with Rossi ahead of the latter's final MotoGP race, and mentioned that they talk "every now and then" since meeting at an event at Silverstone.

Rossi is full of praise for Norris, and also says that he hopes to attend a Formula 1 race in the near future.

"I'm always in contact with Lando because he's been my fan since the beginning," Rossi said. "He had a special helmet like mine at Monza.

"I follow him a lot because I think he's a great, great talent, and he's also very young. He's a funny guy.

"Next year, with more time, I want to try to go and see a Formula 1 race."

Rossi is no stranger to the world of F1. The 42-year-old was heavily linked to a switch to the category after participating in a test with Ferrari back in 2004, but the move never happened.

He then took part in a highly-anticipated swap with Lewis Hamilton in 2019, where Rossi drove Hamilton's Mercedes whilst Hamilton tested out Rossi's bike.

Hamilton said that both he and Rossi "did great" and had "no troubles", though it was later confirmed that both had spun during the event.