Raikkonen to start from the pit lane after rear wing change

Alfa Romeo's Kimi Raikkonen will start his final Brazilian GP from the pit lane, after his team fitted him with a new specification rear wing. 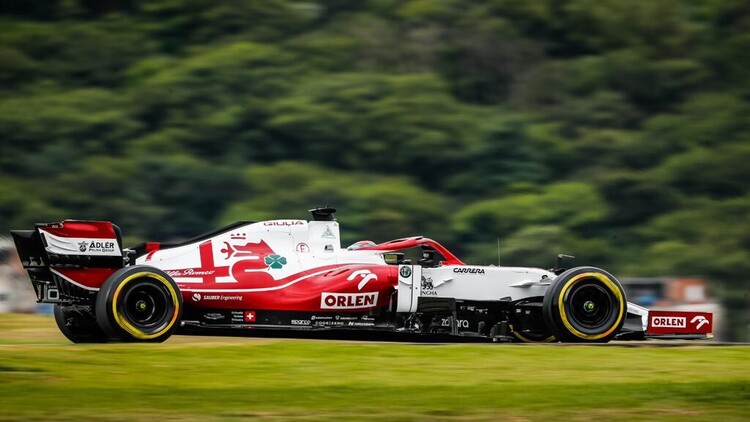 Kimi Raikkonen will start Sunday's Brazilian Grand Prix from the pit lane after Alfa Romeo elected to fit his car with a new rear wing for the race.

Raikkonen was involved in a second-lap clash with teammate Antonio Giovinazzi during the Sprint Qualifying race, which sent the Finn spinning off at Turn 1 after Giovinazzi clipped his rear-left tyre.

With Alfa Romeo giving Raikkonen a new specification rear wing, as well as making setup changes, he will start his final Brazilian GP from the pits, as he begins the fourth-last race of his two-decade-long career.

No grievances with Giovinazzi

Despite being taken out by his teammate, Raikkonen wasn't annoyed in the aftermath of the Sprint Qualifying race.

"I had a good start and I thought I could make some more progress when I had the contact with Antonio," he told media, including RacingNews365.com.

"I went outside [Fernando] Alonso, he went on the inside, and by the time we were at Turn 1, I couldn't really see what was happening on the inside. We had the smallest of touches but that was enough to spin me around, [and] that's about it."

Giovinazzi escaped penalty for the incident and will start Sunday's race from 13th on the grid.

"For the incident with Kimi, it's a shame we made contact. I don't really know what happened," he explained afterwards.

"We were three-wide on the straight, I took the inside, and then, suddenly, I saw Kimi on the outside.

"We touched tyres, I tried to avoid that, but there wasn't really anything I could do. I was on the inside and braked as normal."