Ocon 'one lap away' from a puncture after non-stop race

Alpine's Esteban Ocon believes he was just a single lap away from a tyre failure that would have cost him the final points position in Turkey. 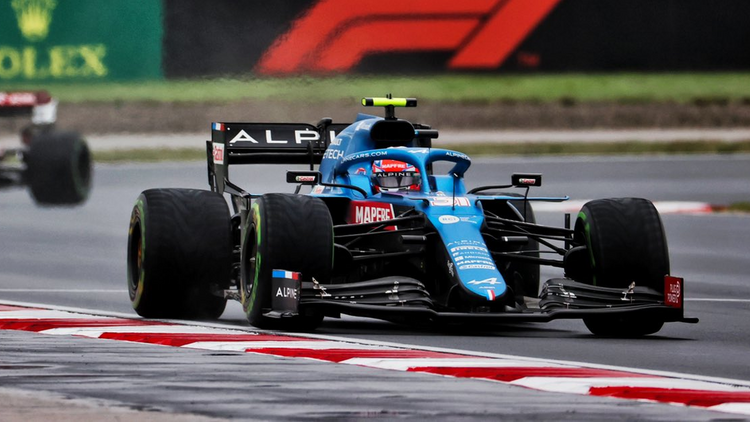 Alpine's Esteban Ocon believes he was just a single lap away from disaster in Turkey, with a puncture imminent on his front right tyre as he was the only driver to get through the race without pitting.

Ocon committed to running the Intermediate tyres right from the start of the race to the chequered flag after working his way up into a points place, but struggled badly towards the end as the carcass of the tyre became visible.

Pirelli revealed after the race that some drivers who pitted very late were driving on the cords of the tyre construction, with Ocon's cords fully visible when he stopped his Alpine in parc ferme after crossing the line.

Speaking after the race, a pleased Ocon said the pace had dropped away so much that he was just a few corners away from losing tenth spot.

"At the end, we were wondering if the front tyre was going to last," he told media, including RacingNews365.com.

"Because they were quite damaged and we could see the rope from the outside of it. So clearly, I think one more lap I'd have got a puncture and two more corners I would have been overtaken by [Antonio] Giovinazzi.

"It was a risky move, but it was worth taking.

"It definitely made sense. And I'm happy that we stayed firm on on our decision and it was worth it."

Ocon said that there was nothing easy about the closing stages of the race, as he battled to keep the tyre alive long enough to cross the line.

"Very difficult, because probably one more lap I would have got a puncture," he said.

"I was trying to avoid kerbs, not damaging more the front right tyre, and I was seven seconds slower than Giovinazzi, so it was a huge amount and I was trying to keep it on track so yeah it was difficult."