Norris frustrated by Sainz clash: It benefitted them a lot more than us

Lando Norris rued a costly first-lap collision with Carlos Sainz in Brazil, as Ferrari strengthened their grip on third in the standings. 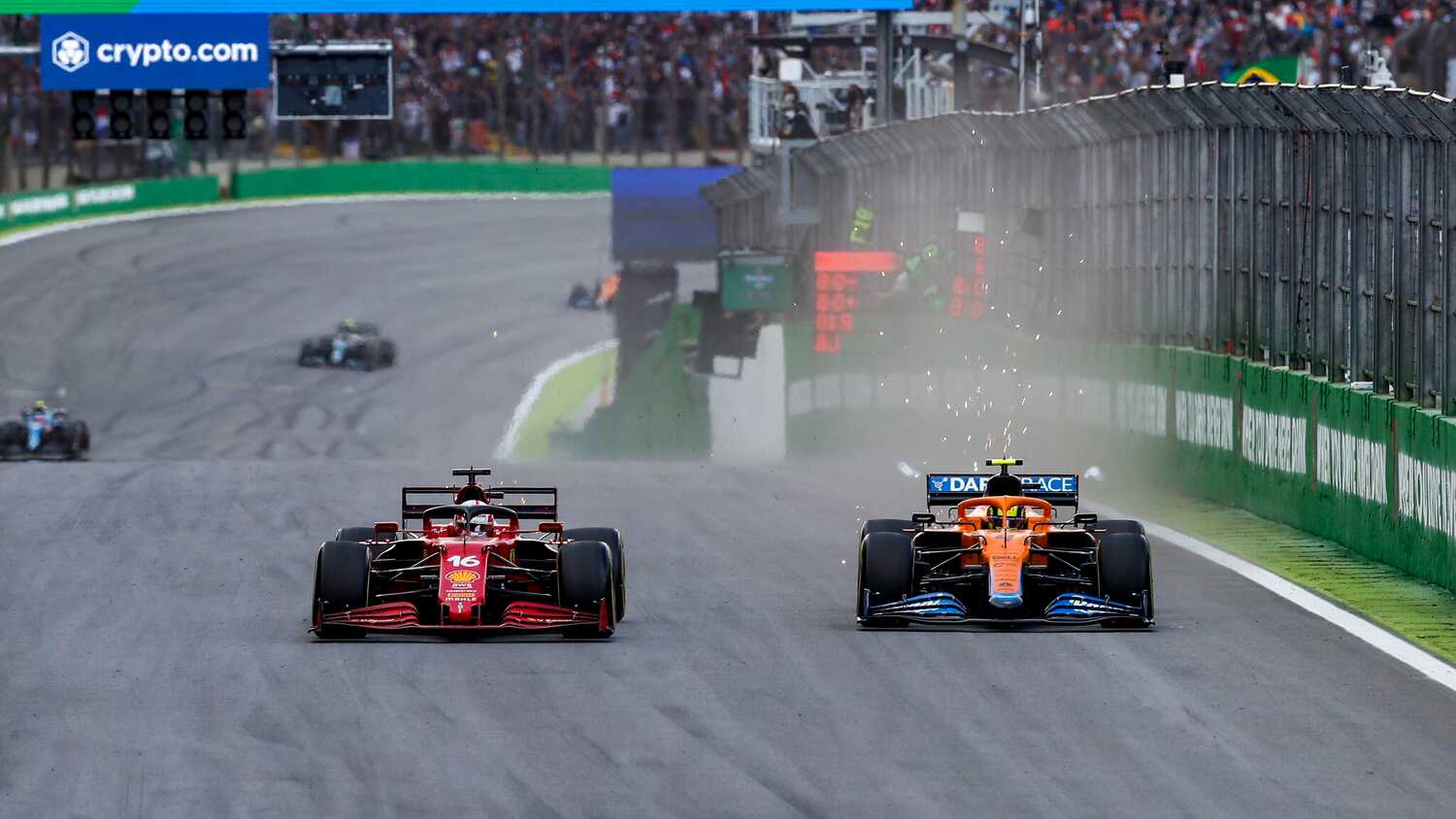 McLaren driver Lando Norris was left to regret a clash with Ferrari rival Carlos Sainz on the opening lap of the Brazilian Grand Prix, which he admits "benefitted them a lot more than us" in the battle for third in the standings.

Norris made a strong start from fifth on the grid to challenge Sainz for third around the outside on the run to Turn 1, but the pair collided before the move was complete. As a result, Norris picked up a rear-left puncture and limped back to the pits.

Rejoining 20th and last, more than 30 seconds adrift of the field, Norris fought his way back to 10th, but fifth and sixth for Ferrari drivers Charles Leclerc and Sainz saw the Italian outfit move 31.5 points clear of McLaren.

Reflecting on the first-lap incident with media, including RacingNews365.com, Norris said: "I had to start turning left for the corner and the guy on the inside also knows that, so you have to respect each other, right?

"I'm a bit on the right side, I'm going to be coming back on at some point, and obviously it benefitted them a lot more than us, in the long term.

"I don't know what else I'm meant to do. I've gone to the right, there was a gap, I had a much better start - miles better start - and I can't just keep looking in my mirrors the whole time, and I can't see it from above where I am.

"I put my car in the best place I thought I could. I don't want to crash, so I thought I would need space, but it wasn't enough."

"Ferrari would have had to fight for it"

Norris felt that he could have challenged the Ferrari drivers for the 'best of the rest' title behind Mercedes and Red Bull had he made the move on Sainz stick.

Reflecting on Ferrari's increased advantage in the Constructors' Championship, Norris said: "Of course, it's frustrating, because I scored one point and could have scored quite a few more.

"Probably Ferrari were still quicker than us, but I would have been ahead of them at the start and they would have had to fight for it quite a bit, I reckon.

"I think we still had good pace, we could have given a good battle throughout the whole stint, so it could have been a lot more, but it wasn't, so I guess that's why I'm unhappy."

Formula 1 will visit new venues in Qatar (Losail) and Saudi Arabia (Jeddah) and a heavily-modified Yas Marina Circuit in Abu Dhabi for the final three rounds of the season, with Norris hopeful that McLaren can show stronger pace.

"I think there's a few more tracks coming up, which I'm hoping will suit our car quite a bit more than here and the previous few races," he added.

"But Ferrari are strong. Don't get me wrong, they're probably a stronger package altogether at the moment, so we'll keep pushing.

"We could have beaten them [in Brazil], I think, even when we didn't have a car quite as quick as them, so I'm there's definitely more opportunities.

"It's going to be difficult [to secured third] unless they make any big mistakes, but we'll try."