Lando Norris salary and net worth

McLaren F1 driver Lando Norris is one of the most popular drivers on the grid, and he signed a multi million dollar contract. But how much does Norris earn? 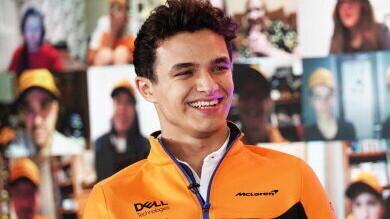 Lando Norris is one of the youngest drivers on the 2021 Formula 1 grid but one of the most popular due to his activities off the race track. The 21-year-old enters his third season in the sport and faces a big challenge against new teammate Daniel Ricciardo.

The Brit was scouted and picked up by McLaren in 2017 to become a junior driver. There has been a lot of spotlight on Norris to make it to the pinnacle of motorsport.

From racing in a BTCC support series championship in 2014, Norris went on to win European F3 title and lived up to expectations in a highly competitive 2018 F2 championship.

The 2021 Formula 1 world championship is Norris' third campaign in the sport.

How much money does Lando Norris earn?

RacingNews365.com has learned from sources based within the Formula 1 paddock that Norris is on an annual salary of $5m. This figure excludes driver performance bonuses and personal sponsors.

Norris is one of the new stars of F1 and with his million dollar contract he is building a fortune. His net worth is estimated at $ 3 million.

He is the son of Cisca and Adam Norris. Adam is a former pensions manager and is said to be the 501st richest man in the UK.

Lando Norris also has three siblings. One of them is Oliver Norris who previously competed in karting alongside his brother.

Norris pushed Carlos Sainz in the two seasons they had together at McLaren and had a breakthrough moment in 2020 when he claimed his maiden F1 podium at the Austrian Grand Prix.

He took advantage of the mayhem that unfolded at the front of the field including a time penalty for Lewis Hamilton to make it onto the podium by the slimmest of margins by setting the fastest lap of the race.

Why is Lando Norris so popular?

As well as having an infectious personality, Norris has also cultivated a fanbase through streaming online. He regularly plays games such as Call of Duty and Minecraft on streaming platform Twitch, where thousands of people watch him play weekly.

Over the course of the 2020 hiatus due to the COVID-19 pandemic, he was a key member of the so-called 'Twitch quartet' - which also included George Russell, Alex Albon and Charles Leclerc.

His popularity online is such that he founded an e-sports and content creation team in the same year, by the name of Quadrant. Their YouTube channel attracted 100,000 subscribers in just three months.

It's no surprise Norris is a hit for younger fans of Formula 1.