The Red Bull team principal has explained how badly damaged Max Verstappen's car was during the Hungarian Grand Prix. 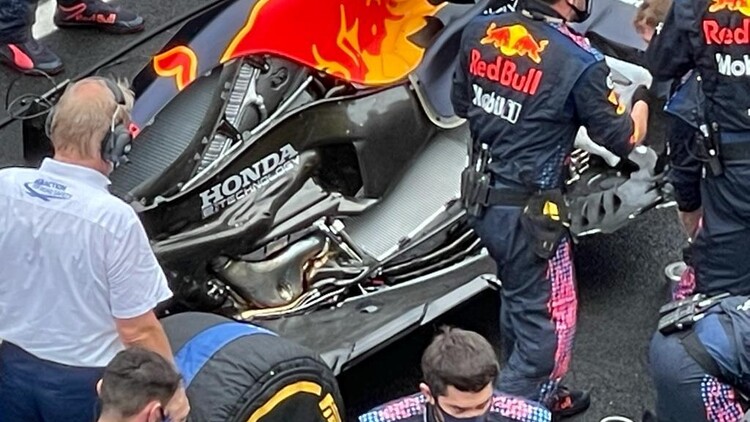 Red Bull team principal Christian Horner has revealed that Max Verstappen probably had less downforce than the Haas cars during the Hungarian Grand Prix, due to the damage he suffered at the start of the race.

Verstappen was hit by Lando Norris at Turn 1 on the opening lap in a chaotic accident that was triggered by Valtteri Bottas. It resulted in Verstappen taking one point which handed the lead of the Drivers' Championship to Lewis Hamilton who came third.

"Valtteri obviously made a bad start it looks like, he misjudged his braking point for the first corner," Horner told Sky Sports. "Sort of a karting error where they try and take too much back and unfortunately the result for us was he eliminated both of our cars so massively frustrating

"The cost of the damage, it looks like an engine on Sergio [Perez's] car and for Max, the mechanics work wonders to get that car even running, I mean all the temperatures were off the scale where they've had to straighten pipes out. Hugely frustrating.

"He's run with half a car. The entire right hand side of the bargeboard was missing. He probably had less downforce than Mick Schumacher today so that's that's brutal for us.

"But I think the team did well to get the car back out there, nailed the fastest stop, Max fought for that one point and that could prove vital at the end of the year."

Verstappen has been on the end of two incidents in two races where a Mercedes car has been deemed to be at fault by the stewards. Horner joked whether Toto Wolff was going to pay the bill for the damage sustained to Verstappen's and Perez's cars in Hungary.

"It's racing," Horner added. "Toto wasn't driving the car, I'm sure he wasn't that sorry to see the result but I'm sure he didn't tell Valtteri to do that.

"But the consequences for us is brutal in a cost cap environment and that needs looking at by the FIA."