Horner furious after 'hollow' Hamilton win: I hope Lewis is happy with himself

Red Bull's Christian Horner was fuming after the British Grand Prix, after watching Lewis Hamilton take the win after being given a penalty for taking Max Verstappen out of the race. 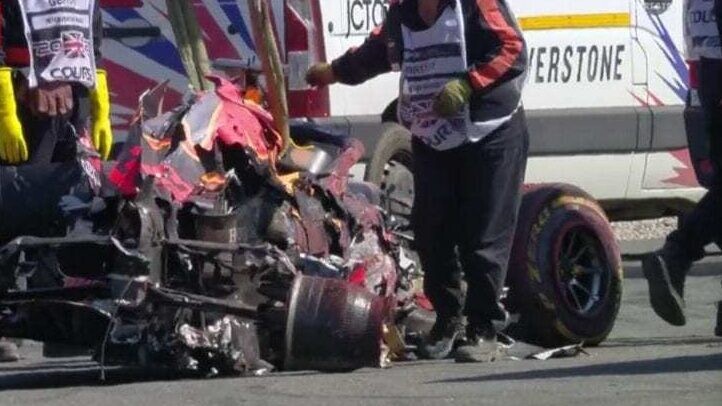 A furious Christian Horner has slammed Lewis Hamilton after the Mercedes driver won the British Grand Prix, overcoming a time penalty after taking Red Bull's Max Verstappen out of the race on the first lap.

Hamilton had been on the inside through Copse on the opening lap, tagging the right rear of the Red Bull as Verstappen swept through the corner. With Hamilton appearing to have enough room, the stewards gave Hamilton a ten second time penalty while Verstappen was brought to hospital after a 51G impact with the barrier.

"It shouldn't be like that to be honest with you," a tight-lipped Horner told Sky Sports F1.

"Max has incurred a 51G accident, Lewis Hamilton is an eight (sic) time World Champion, he shouldn't be making maneuvers like that, it's unacceptable.

"Thank goodness the biggest result for us today is that he [Verstappen] was uninjured. He's having to go to hospital for precautionary checks after a 51 G accident so I hope Lewis is very happy with himself."

Horner said he didn't feel Hamilton was entitled to make the overtaking attempt that resulted in the clash.

"He stuck a wheel up the inside in a corner that you just don't stick a wheel up inside at Copse, at that corner in that circumstance, he was nowhere near ahead," explained Horner.

"It was contact left front to right rear. And the speed that they're traveling is one of the fastest corners in the championship and Lewis has got more than enough experience to know that that's unacceptable.

"I'm just very disappointed that a driver of his calibre should make such a move. He's dangerous. It looked desperate, and he's put a competitor.. thank goodness uninjured, but in hospital getting himself checked out."

When asked about what he thought about the Mercedes' point of view of the incident, Horner interrupted to say that he didn't feel there was any debate to be had.

"There is no point. I don't care what Lewis says," he said.

"Have a look on your own analysis, draw your own comparison. For me, that's a hollow victory.

"It wasn't really much of a penalty, was it?"