Hill sympathises with Bottas: It could be a tough summer

Not only did Valtteri Bottas cause the Turn 1 melee at the Hungarian Grand Prix, but the Finnish driver is also awaiting Mercedes' decision on his future whilst F1 is on its summer break. Damon Hill can understand how Bottas might be feeling during this time. 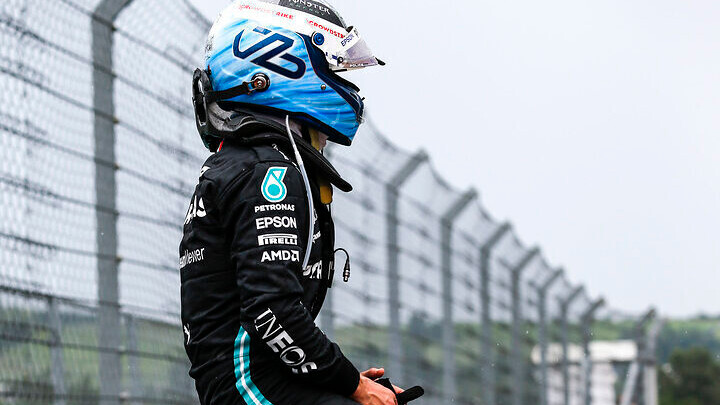 Damon Hill has some sympathy for Valtteri Bottas given the weight of what might be on his mind during F1's summer break.

The Hungarian Grand Prix was not the best way to sign off, with the Finn causing the Turn 1 melee that eliminated Lando Norris and Sergio Perez as well as causing significant damage to Max Verstappen's car. Bottas was given a five-place grid penalty for this which will be taken at the next race.

Meanwhile the Mercedes driver is also awaiting a decision from the team regarding his future, and Hill thinks this will make it even harder for Bottas to relax over the summer.

"It's awful when you make a complete pig's ear of something like that [in Hungary] as a racing driver, you are desperate for the next race so you can put it behind you," Hill told the F1 Nation podcast.

"You've just got to get on to recovery mode and get a good result behind you. But of course, you've got this thing now sort of hanging over. He's got the whole summer break to have this thing sort of in the back of his mind.

"And of course, decisions are going to be made about his future, we're told. It could be a tough summer there for Valtteri, and you do feel for him for that because it's not much fun. I've been there, it's not nice."

On Bottas' mistake at the Hungaroring, Hill explained: "It's a wet race, they're going diving down into the first corner, the first lap. You've got to give yourself a little bit of space, and I think Valtteri just got caught out when Lando started to break."

Following the error, Bottas apologised to those involved including Norris, who admitted that unfortunately this could not change his result.