Has Bottas lost motivation to support Hamilton in his title bid?

A key issue for Mercedes in their continuing championship fight with Red Bull is whether they can still rely on the support of Valtteri Bottas, believes former F1 driver Timo Glock. 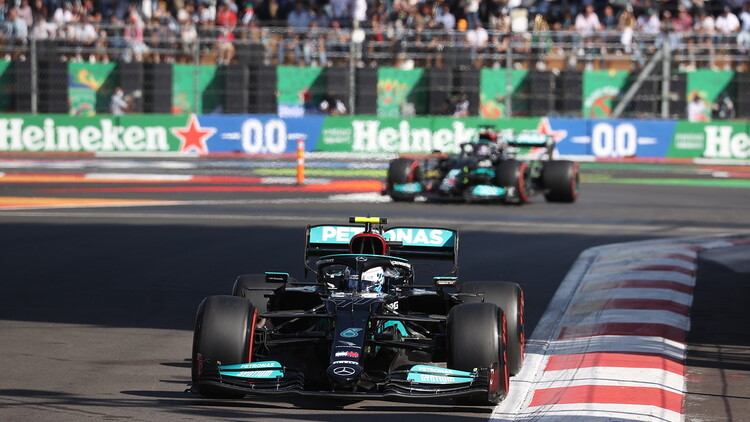 Former F1 driver Timo Glock believes that Mercedes' championship bid could be hindered by Valtteri Bottas no longer having the motivation to support Lewis Hamilton.

The Finn was initially the subject of seemingly critical comments from Hamilton after the Mexican Grand Prix, with Hamilton arguing that Bottas had "left the door open" for Verstappen as the trio battled into Turn 1, allowing Verstappen to take the lead. However, the Briton later defended his teammate on social media.

In light of this, Glock thinks that Bottas - who will leave the Silver Arrows at the end of the season to join Alfa Romeo - may no longer have the desire to help Hamilton and the team in their title fight against Verstappen and Red Bull.

"Lewis Hamilton has a good car, sure. But it's not good enough to beat the Red Bull and Max," Glock wrote in his column for Sky Sports.

"The problem with Mercedes, I feel, is that Valtteri Bottas no longer has the motivation to continue to give Lewis his full support. That was obvious to me. Of course, that's always easy to say from the outside.

"But I think Mercedes discussed the strategy relatively clearly in advance and went through countless scenarios regarding the start. In that case, Valtteri concentrated more on Lewis, which I didn't understand.

"I think his task was clearly to do everything against Max to pave the way for Lewis to be in front in Turn 1. That didn't work at all."

In contrast, Glock believes that Sergio Perez is a key team player at Red Bull, and that this gives the Milton Keynes-based squad an advantage in the championship battle.

"I find it hard to believe that Mercedes can still rely on Valtteri. Red Bull has a clearer opportunity to rely on Sergio Perez," Glock explained.

"He has shown that. He drove his heart out to be able to help at the front and take the points away from Lewis.

"That's why I see the better cards in the World Championship fight with Red Bull. As far as the Constructors' title is concerned, too, you have two drivers on whom you can clearly place your bets.

"Of course, Valtteri also wants to achieve good results, but Mercedes is falling behind in the fight for the title."

As things stand after the Mexican Grand Prix, Verstappen has a 19-point lead over Hamilton in the Drivers' standings, whilst Red Bull are now only one point behind Mercedes in the Constructors' with four races remaining.