Hamilton shocked with front row: The car had been a disaster all weekend

The seven-time world champion was stunned to put his Mercedes on the front row of the grid for the Azerbaijan GP. Hamilton will start from second place alongside Charles Leclerc 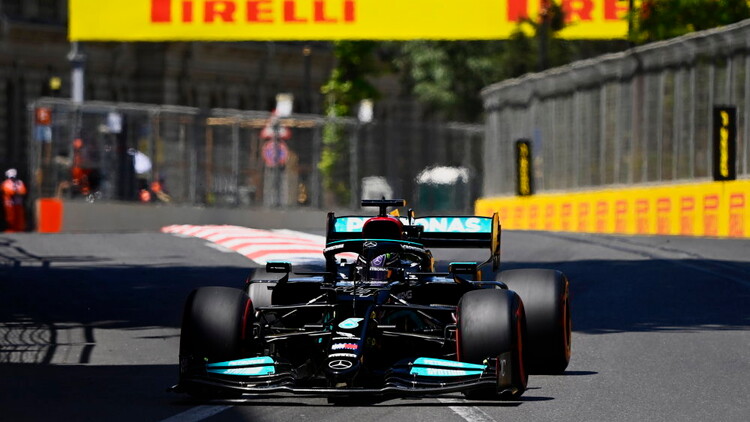 Lewis Hamilton was shocked to qualify in second place for Sunday's Azerbaijan GP after a troublesome build-up to qualifying.

Hamilton and Mercedes were off the pace all weekend in the practice sessions as the world champion's Monaco woes looked set to continue in Baku. However, Hamilton managed to hook things up when it mattered most to get onto the front row of the grid and will start ahead of championship rival Max Verstappen.

"The car has been a bit of a disaster all weekend so to be up here it's massively down to our great, great team," said Hamilton. "We definitely weren't expecting it.

"This is such a such a monumental result for us because we've been struggling like you couldn't believe all weekend. We kept our composure that we've had and continued to have difficult discussions in the background and just never taken no for an officer.

"We've made so many changes over these two days, it's been so difficult. But I think the work overnight and particularly between the sessions was amazing from the team and I'm really proud of everyone for keeping positive."

Hamilton feels that the cooler track conditions, due to multiple delays during qualifying, was not a factor in his upturn in form and is hopeful that his race pace can see him challenge Leclerc and fight Verstappen to try and reclaim the championship lead.

It's crazy trying to switch these tyres on," added Hamilton. "Trying to find the envelope for this car has been the biggest challenge that we've had in a long time.

"We were a lot closer in race trim. We don't understand why, so hopefully we can take the fight to these guys tomorrow."