Hamilton hopeful upgrades will close gap to Red Bull, but by how much?

Lewis Hamilton will be looking to end a run of five races without a victory when F1 touches down at Silverstone this weekend. Mercedes will be bringing some upgrades to the track in hopes of ending Red Bull's recent run of good form. 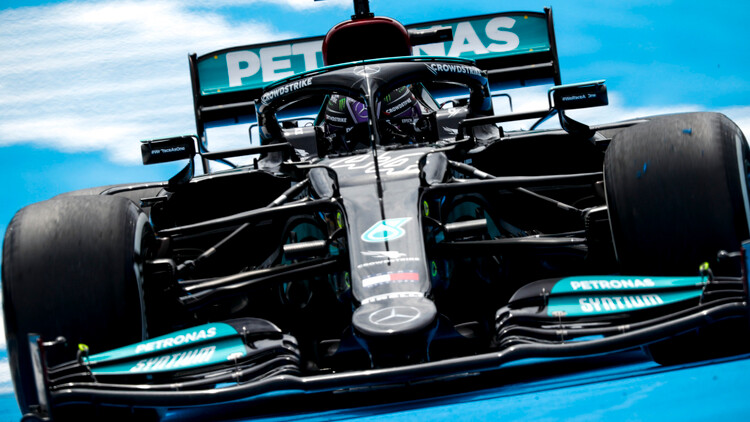 Mercedes will be bringing upgrades to the British GP this weekend, and while Lewis Hamilton is hopeful it will help cut the gap on track on Red Bull, he isn't sure it's enough to eliminate the deficit seen in the last couple of races.

Hamilton currently trails Max Verstappen by 32 points in the Drivers' Championship as the Dutchman has won four of the last five races. Hamilton has been vocal about how Mercedes need upgrades to continue their fight with Red Bull, which the team will introduce at Silverstone this weekend, but it doesn't appear he's convinced it's enough.

"There's a lot of changes on the car, but it's not a massive update in terms of the big gap that we've seen in the races," Hamilton told RacingNews365.com and other members of the media.

"It definitely helps us in terms of closing that gap, hopefully."

A capacity crowd is expected at Silverstone this weekend, and Hamilton is hoping he can deliver in front of his home fans after racing there without a crowd in 2021.

"The roar of the crowd here is unlike anywhere else," Hamilton added. "Considering we've had a drought in terms of fans not being at the races in the past year, the energy has definitely been very much missed.

"You arrive with this kind of excitement but also this kind of nervousness because you want to deliver for everyone, and we want everyone to have the best weekend."

Hamilton previously stated he wasn't sure a capacity crowd should return to Silverstone given the pandemic is still ongoing, and he insisted his opinion hasn't changed all that much ahead of the weekend.

"I have the same feelings since the last time we spoke," Hamilton added. "Of course I'm excited to see people. We just saw Wimbledon, I saw images of so many people together but we do know the COVID rate has shot up in the UK.

"So I would just continue to say just everyone please wear your mask and try to enjoy your weekend. We're still in this pandemic so I think we just got to continuously remind people to take care, we want people to come and have a great weekend.

"It's amazing that we're going to see people, but we want them to leave and go home and get on with their weekend and be healthy."