Hamilton helped by 'spies' in title fight with Verstappen

As well as personnel who are present at the track during a Grand Prix weekend, F1 teams also have a group of staff working hard back at the factory. At Mercedes, this involves several students monitoring the radio communications of other teams like 'spies'. 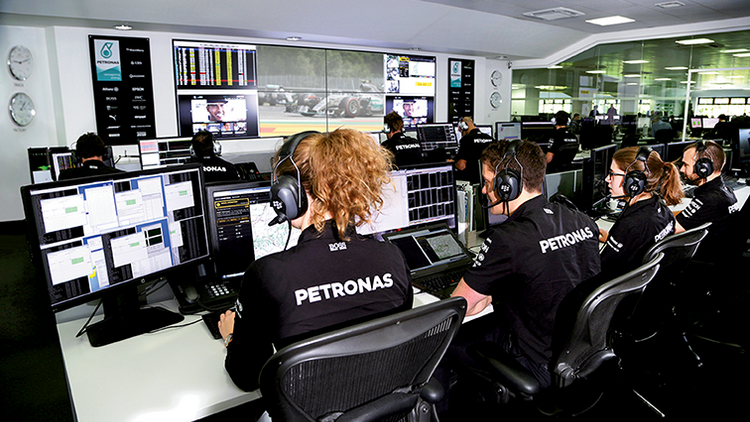 During a Grand Prix, F1 teams have to set up a whole operation not only at the track, but also in their own factory, in order to achieve the best possible result. Personnel at the circuit are in close contact with those back at base, whose main role is to study various data.

The Mercedes factory was visited by The Sun during the United States Grand Prix, where they had a look into the Race Support Room, thousands of kilometres away from the circuit in Austin. Everything you can think of in terms of data is studied there by dozens of employees.

There are up to 30 managers, each responsible for certain data channels that provide information about the cars of Lewis Hamilton and Valtteri Bottas. At the same time, around 10 'spies' are at work. They decipher code language, transcripts and team radios of the competition, which they then pass on to their superior. The latter is in contact with those at the track, who can then adapt the strategy accordingly.

Mercedes team boss Toto Wolff says the Race Support Room is "the remote brain" of the Formula 1 team: "Whilst we are racing, everybody in the RSR keeps the machine moving.

"When we're sleeping, they are learning so we have a car and an engine that goes faster than anyone else."

The spies are volunteers, students, who are sorely needed. Dominique Riefstahl, who runs the Race Support Room, explained: "It's extra manpower, because listening to 20 car feeds' worth of people talking, you just need ears to monitor all of the TV feeds, you need eyes on the ground."

Joseph McMillan, Senior Race Strategy Engineer, added: "The students are doing things like listening to all the radio comms and transcribing, so we can see all the text, and clipping videos.

"They volunteer at the weekends because it's cool."

Hamilton himself also knows how important the Race Support Room can be.

"The RSR is so important for the team and how we function through the weekend," Hamilton said. "When we do our big comms meetings, the RSR team are on the other line listening in and we are just one big team.

"The guys in the RSR back at the factory are doing a huge amount of simulation, preparation, finding answers, downloading information and understanding that information so we can make the right choices on a weekend.

"They are a super-important extension to what we do at the track as we have limited numbers and are integral to us achieving our goal which is winning races."

This support will most likely be a boost to Hamilton as he continues in his battle for the 2021 World Championship against Red Bull's Max Verstappen.