Ross Brawn is excited about the 2021 F1 season finale in Abu Dhabi, but hopes that the title will be decided on the track rather than in the stewards' office. 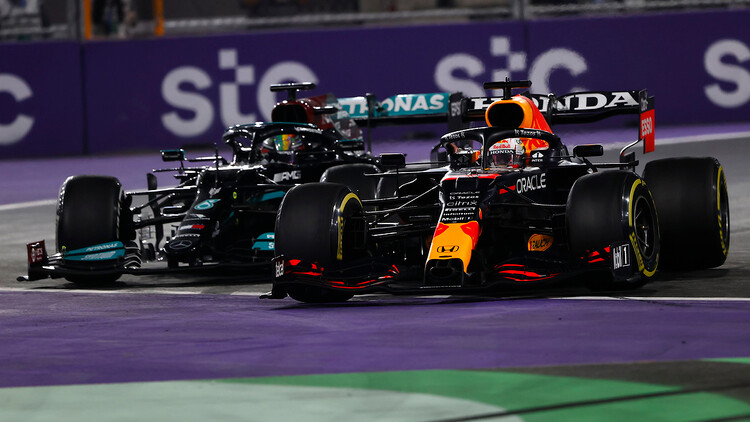 Ross Brawn has warned that Lewis Hamilton and Max Verstappen must not "step over the line" if the title is to be decided on track at the Abu Dhabi Grand Prix.

The fight for the World Championship took another turn at the penultimate race of the year in Saudi Arabia, with the rivals battling it out for the lead before being involved in a controversial clash which resulted in Verstappen later receiving a 10-second time penalty.

They now head to the season finale on equal points, and Brawn is excited about the prospect of this.

"This sport has had everything this season - and it gave us even more on Sunday," Brawn wrote in his column for Formula1.com following the Saudi Arabian Grand Prix.

"So much intrigue, so much tension, so much fighting between the two main protagonists. It was just sensational.

"I think it's been 47 years since we went into the last race with both contenders on the same points and I think everybody wants to see a fabulous contest in Abu Dhabi."

"We want a sporting competition"

However, with some F1 pundits criticising Verstappen's driving during the race in Jeddah - including Johnny Herbert and Martin Brundle - Brawn hopes that the title contenders will keep it clean when the championship is decided in Abu Dhabi.

"It will be tough," the sport's Managing Director said. "Neither will give an inch, but we want a sporting competition.

"We don't want to step over the line. We don't want this championship to be decided by stewards' decisions and to end up in the appeal courts or elsewhere.

"It must end up on the track in Abu Dhabi with the best driver winning."

As well as looking forward to the title fight being decided in Abu Dhabi, Brawn is also keen to see what the drivers think to the modifications that have been made to the Yas Marina Circuit.

"I'm looking forward to the finale in Abu Dhabi too as they have modified the track there, which I'm really pleased about, as I think it will present a new challenge to the drivers," Brawn explained.

"I think they are going to enjoy it a lot more. The simulations we have done show the new Abu Dhabi is a better racing track with more opportunities for overtaking.

"I'm keen to see what the drivers say about it. Make sure you're glued to your seats next Sunday as this is going to be exciting."