Anthony Hamilton: People got value for their money at the British GP

Lewis Hamilton's father believes people should be focusing on the "phenomenal" British Grand Prix rather than the collision between his son and Max Verstappen.

Lewis Hamilton's father, Anthony Hamilton, made it clear that the most important thing other than Max Verstappen's health was the excitement of the British Grand Prix.

The race was a controversial affair as Lewis Hamilton ended his winless streak by overtaking Charles Leclerc with three laps to go, having collided with title rival Verstappen one lap one to receive a 10-second time penalty for causing the contact. Anthony Hamilton has urged that it was just racing.

"At the end of the day, it's a racing incident and 99 times out of 100 it's a race incident," Hamilton told Sky Sports. “What do you want then? Drivers lining up neatly on the straight and then taking it easy. This is a race.

"The most important thing about this weekend, other than hopefully that Max is well, is that the fans got a phenomenal race. Not just at the British Grand Prix, [but] worldwide. Everyone watching this race got a phenomenal race and that's what we should be talking about.

“That’s the most important thing, without the fans we don’t have a race. At the end of the day, six and one half dozen of the other, it's not important. What is important is people got value for their money.

"Has it raised a huge amount of spirits given the pandemic and issues going on around the world? I think so. That's the centre of focus, we should be happy and celebrating."

Hamilton thinks the rivalry between his son and Verstappen are nowhere near the levels of Ayrton Senna and Alain Prost. He also dismissed claims that Lewis had intentions of causing a collision at Silverstone.

"Both those guys get on the grid to have a good race, sometimes it doesn’t go as expected, but that’s just racing," added Hamilton.

"Certainly Lewis isn’t sitting at home thinking I’m going to do this or that. Lewis is out there to race and I think Max is as well. Just sometimes, when you have got two guys fighting for something at the front, maybe that's what happens.

"We hope it doesn't happen anymore but it's not just at the front, it happens at the back many more times. It’s just part of racing and we have got to keep the spirit of racing.

"At the end of the day, people want to see some racing - fair racing, decent racing and we need to give people what they came to see." 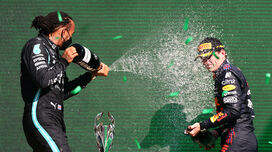