The team have issued a statement to express their disappointment about the way the Belgian Grand Prix was handled by Formula 1. 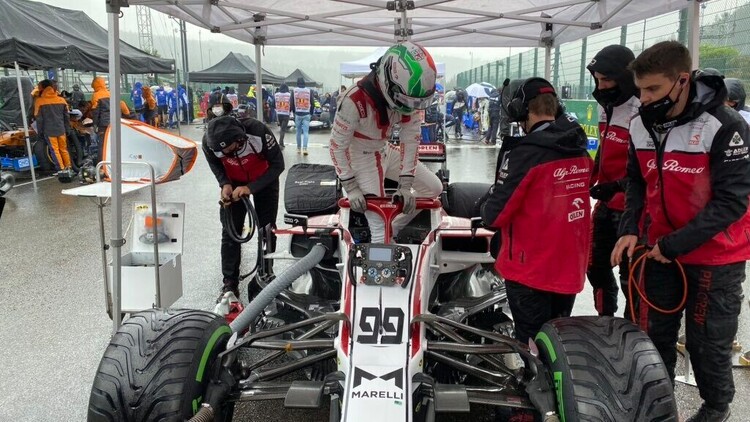 Alfa Romeo say they hope F1 will learn some lessons following a controversial ending to the Belgian Grand Prix when half points were awarded to the top 10 drivers.

On the final attempt, at 18:17 local time, two laps were held behind the Safety Car, which was enough for half points to be handed out despite there being no green-flag running.

"The decision not to race in these conditions was the right one, in the interest of protecting the safety of the drivers, the marshals and the spectators themselves," Alfa Romeo said in a statement.

"However, the situation would have been dealt with a lot more appropriately by not having at all the 'race' we witnessed yesterday: this outcome hurts us all, but in particular it hurts the fans of the sport, who didn't get the show they came to see.

"We hope lessons were learnt yesterday, lessons that will improve the way we operate in the future and that put the supporters of our sport in the position they deserve to be."

Alfa Romeo lost further ground to Williams in the Constructors' Championship as Antonio Giovinazzi and Kimi Raikkonen were classified in 13th and 18th. In contrast, George Russell finished in a career-best second place with Nicholas Latifi taking half a point for 10th.

Lewis Hamilton has called for the 75,000 spectators who attended the race to get their money back. Alfa Romeo have shown their support to the fans who waited for several hours before the race was eventually called off.

"A huge thank you to all the incredible fans that spent hours in the elements for the race to start," continued the Alfa Romeo statement. "With your patience and determination, you are the true 'Drivers of the Day'.

"For months, we have been looking forward to having the stands full of fans supporting our team and our sport: unfortunately, we weren't able to put up a show for you yesterday.

"Once again, our genuine thanks go to all the fans – you were the ones to truly shine yesterday in Spa."