F1 scandals: 39 years since Pironi and Villeneuve went to war at Imola

The 1982 San Marino GP marked the start of a tragically short-lived feud between Ferrari team-mates Gilles Villeneuve and Didier Pironi. 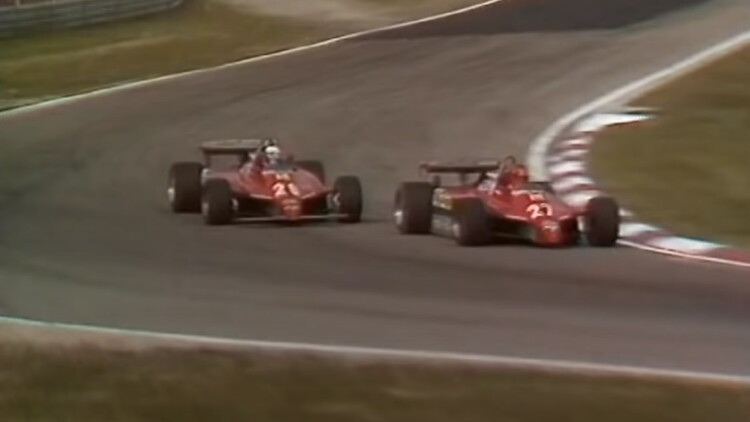 April 25 is a date burned into the minds of fans of Gilles Villeneuve and Didier Pironi, as this was the day, in 1982, when the two Ferrari team-mates began a war that ended with the death of Villeneuve just weeks later.

Having started behind the turbocharged Renaults, the Ferraris found themselves leading the race in comfort after the retirement of both Alain Prost and Rene Arnoux with turbo failures. Entering the closing stages of a home race for Ferrari, Villeneuve left at the head of the field with Pironi in second position.

That, then, was that, according to Gilles. After years of being Number Two at Ferrari to Jody Scheckter, Gilles felt he had earned team leadership, and his feeling was completely justified when Ferrari held out signs saying ‘Slow Down’ to their leading cars, under no threat from behind.

Now completely comfortable with only a handful of laps to go, Gilles relaxed and eased off his full outright pace, and was surprised when his team-mate came barrelling past him moments later.

Figuring this was just a show, an off the cuff drama for the delighted tifosi in the stands, Villeneuve didn’t suspect any foul play, he set about catching and passing his team mate again. This he succeeded in doing shortly afterwards, diving up the inside into Piratella.

The two traded places a number of times over the remaining laps, with Villeneuve at no point thinking that his team mates actions were in any way duplicitous. On the penultimate lap, Gilles took over the lead again after Pironi left a gap at Tosa, with Villeneuve then thinking that was the race, and apparent orchestrated show, over.

However, on the final lap, Pironi got a run on Villeneuve and passed him again, and this time held on to take the win. Gilles was furious, and felt utterly betrayed by a man he counted as a friend.

Onwards then, to the next round, at Zolder in Belgium. Villeneuve travelled alone to the circuit, which was unusual for him, as he usually brought his wife, Joan, and his children, Jacques and Melanie to the races.

However, Melanie was celebrating her first Communion on raceday, and so Gilles found himself alone. At a particularly vulnerable time too, as Gilles felt isolated at Ferrari also.

Despite being there a number of years longer than Pironi, Didier had clicked with the Ferrari manager Marco Piccinnini, and had even been best man at his wedding, an event Gilles had not even been invited to attend.

Together with Ferrari’s refusal to censure Pironi for his conduct at Imola, Gilles vowed to beat Pironi at every opportunity. Every session, every lap, he wanted to destory Pironi.

Speaking to Nigel Roebuck (now a columnist for Motor Sport Magazine), Gilles said ‘This is War. Absolutely, this is War.’

It was a war that Gilles immediately went to, lapping 1.2 seconds faster than Pironi in practise for the Belgian round. Qualifying day came then, and Gilles set a string of very fast laps, using up every single little bit of grip his car had to offer.

Knowing he couldn’t go any faster, Ferrari instructed him to pit, on a best laptime of 1.16.6. Unfortunately for Villeneuve, Pironi had set a 1.16.5.

It remains unclear whether Villeneuve was attempting another fast lap, or was just doing a fast inlap on his next tour around the Belgian circuit.

What is clear, is that Villeneuve was doing a speed of around 150mph approaching the Terlamenbocht kink when he came across the March car driven by Jochen Mass. Villeneuve struck the back of the March and was catapaulted out of the car, while the car cartwheeled end over end down the track.

Professor Sid Watkins oversaw his transfer to hospital and placement on life support, but Gilles’ wife Joan flew in that evening and gave her permission for his life support to be switched off. Gilles Villeneuve died at 9.10pm on May 8th, 1982.

Every story needs a villain of the piece, a fiend against whom the reader can feel animosity or resentment.

While Gilles clearly thought Didier was the villain, if we look at the story from a subjective viewpoint, was Didier doing anything he wasn’t supposed to? He was a racing driver, and on that day at Imola, he was racing.

He claimed afterwards to not understand that a team order had been issued, and didn’t feel he had done anything wrong. Whether there was duplicity in his actions or his words, that isn’t known, and it is a little unimportant as to whether he did or didn’t intend to betray Gilles.

"When I joined Ferrari the whole team was so devoted to Gilles," Pironi said on his arrival at Ferrari. "I mean he was not just the top driver, he was much more than that. He had a small family there. He made me fit right in and I felt at home right away overnight and Gilles made no distinctions either. I was expecting to be put in my place, I was not number one. I was number two. He treated me like an equal all the way."

Didier went on to lead the Ferrari team after Gilles’ death, and took the lead of the championship. However, before the end of the year, he would be critically injured in a smash at Hockenheim, in which his legs were badly damaged. Putting an end to his driving career, Pironi recovered and made the move to powerboat racing, where he was killed in a crash in 1987.

It may be a tad melodramatic to claim that both men's careers and lives changed irrevocably on that fateful day at Imola.

It does appear true though, Villeneuve felt aggrieved enough by his team-mates actions to become so completely hell bent on destroying him, that he ended up destroying himself for the sake of one tenth of a second.

Sadly, Gilles was able to remain true to the vow he made at Imola, "I will never speak to Pironi again as long as I live".