The two team bosses have explained why they feel their own rivalry prevents them from being friendly to each other after an intense year on-track. 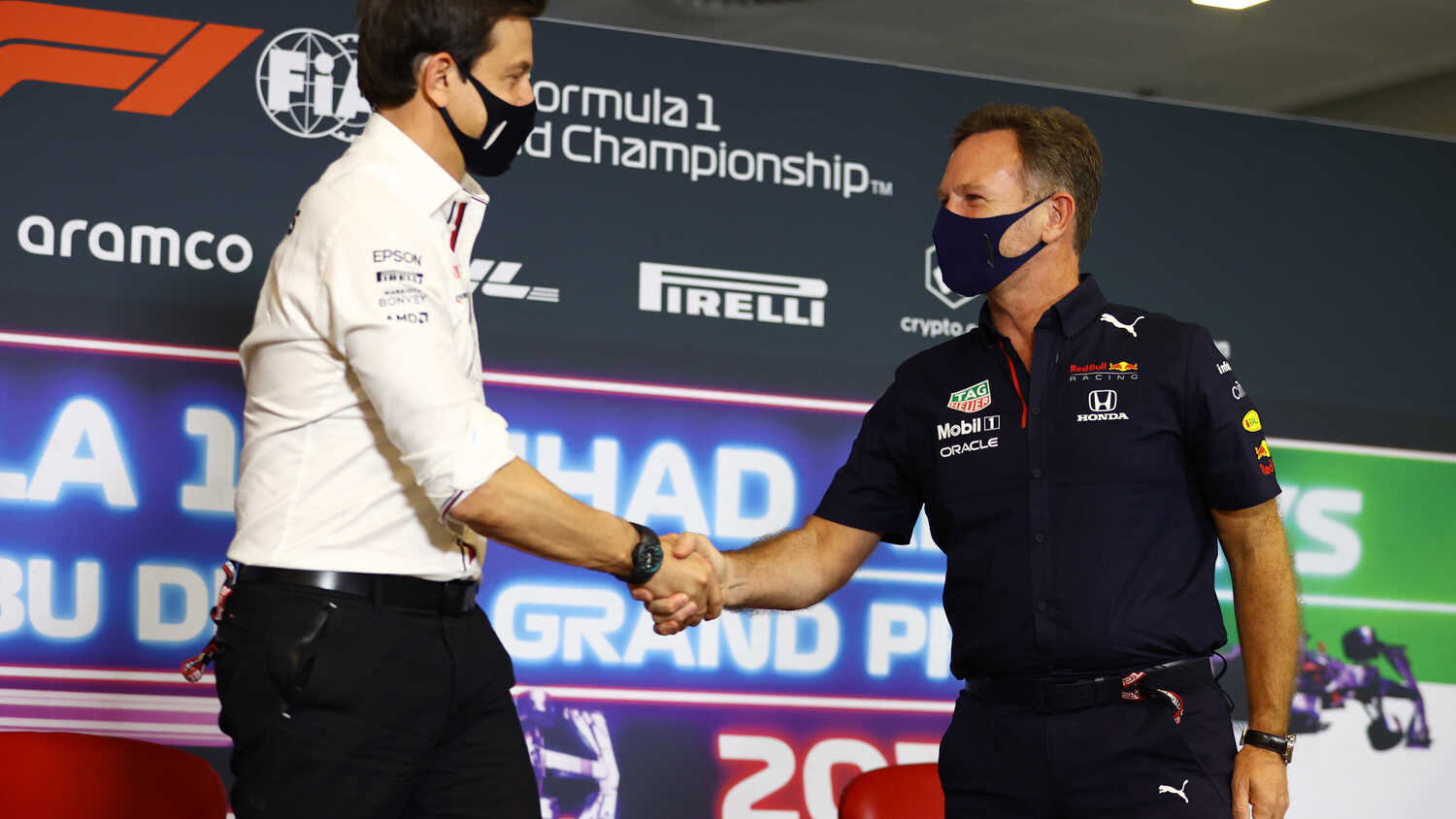 Red Bull and Mercedes team bosses Christian Horner and Toto Wolff have spoken about their own rivalry, which has almost been as intense and heated as that of the one between their two drivers.

Both bosses haven't shied away from controversial comments about each other over the 2021 season, as well as representing the teams through their sporting rivalry on- and off-track.

But heading into the final race in Abu Dhabi as Max Verstappen and Lewis Hamilton square off for the Drivers' Championship, both sat down together to face the media at the FIA Press Conference on Friday.

After such a long and hard battle, the pair attempted to diffuse the tension by shaking hands as they spoke about the season.

"Good luck. May the best man and the best team win," said Wolff, as he turned to offer his hand to Horner, while the Red Bull boss agreed.

"It shows the intensity of competition"

Horner explained why he feels the relationship between the pair has been so tense.

"We're competing for two of the biggest trophies in sport and the competition is intense," he said.

"I think, as characters, obviously we're quite different, but we share a same intensity, the same competitiveness.

"There's been competition on-track, off-track, and it's been pushing the boundaries, and Toto has done the same from his side."

Horner added that it would be impossible for him to fake a more respectful and friendly relationship, preferring to be more honest about his feelings as situations evolve.

"It has got heated and I think that's sport," he commented.

"Emotions all over, we're in a competitive sport. That's Formula 1, it shows the intensity of the competition, the intensity between the teams. It's given you guys [journalists] something to write about, but I think it's just been honest, more than anything.

"It would be totally fake to sit here and say how much we love each other and that we're going to go on holiday after this weekend."

Turning to Wolff, he said: "Because I'm not going on holiday with you after this weekend, by the way!"

"It wouldn't be much fun!" smiled Wolff in response.

A rare moment of agreement

Wolff then agreed with Horner's assessment of the situation, explaining that it's impossible for two people representing the two rival teams, and representing their own biases, to be amiable about the battle.

"I would agree with Christian, I think there is mutual respect for the job that the other team has done," said Wolff.

"They wouldn't be where they are, competing for these championships all along, but it is just too intense.

"I stand for the team and the interest of the team, and that can be fierce at times, because it's not only the drivers who are battling on track. It's a fight for an advantage in the regulations.

"Obviously, we have also certain biases that come from different perspectives and different perceptions. I can understand that rationally, but if things go against the team, or against the two drivers, I can get quite emotional in the moment.

"Christian has his own way of dealing with it, as he said, [we have] very different personalities. But it is justified for this trophy, and one of the most important prizes in sport is a World Championship.

"That's why you cannot expect a lot of shmoozing between drivers, Team Principals and all the team."