Winners and losers from the F1 Russian Grand Prix

Sunday's Russian Grand Prix almost resulted in a fairytale maiden win for McLaren's Lando Norris, however Lewis Hamilton and Max Verstappen eventually claimed the top two spots. Who were the big winners and losers from Sochi? 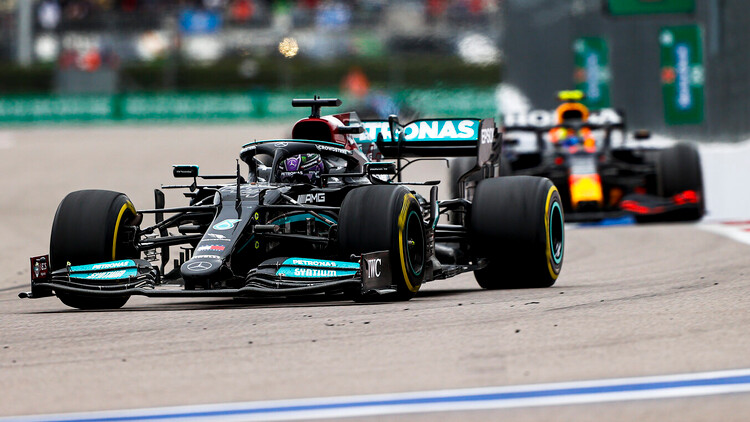 Mercedes' Lewis Hamilton reclaimed the lead of the Drivers' Championship with victory in Sochi, but it was Red Bull's Max Verstappen who left Russia smiling after finishing second despite his grid penalty.

As expected, Verstappen served his grid penalty in Sochi after Red Bull fitted him out with his fourth power unit of the year ahead of Friday's second practice session.

From there, victory was never likely, with anything above third position, or simply finishing ahead of Hamilton, the goal in order to minimise the damage in the Drivers' Championship.

Thanks to a solid and clean recovery through the field, Verstappen looked set for a sixth- or seventh-place finish at best but, fortunately for him, he was one of the early switchers to the Intermediates when the rain began to drizzle. This proved to be the right call, with Verstappen vaulting up the order to finish second, losing just seven points in total to Hamilton at an event where he got the dreaded penalty off his back.

An overtake on Valtteri Bottas in the early stages was crucial, given that getting caught behind the far from rapid Finn could have destroyed his race further.

With Red Bull having come through the Monza and Sochi weekends with a net loss of seven points to Hamilton, Verstappen will be grinning from ear to ear. Armed with a fresh engine back in his pool for the year, the upcoming circuits should suit Red Bull's particular strengths far more. 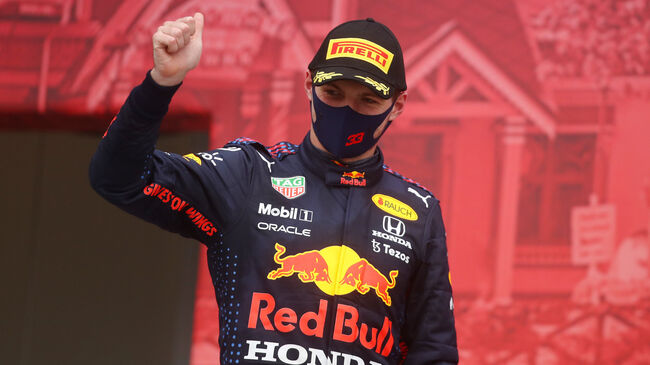 Hamilton took his 100th Grand Prix victory, achieving the unthinkable for a Formula 1 driver, as well as reclaiming the lead in the championship ahead of Verstappen.

It was a race of two halves for Hamilton. Relatively low-key throughout the first phase of the race, he struggled to get past Daniel Ricciardo and didn't look likely to clear Lando Norris either in the closing stages.

But Mercedes' call to pit him from second in the rain to cover off Verstappen proved the correct one, and Hamilton kept it on the road to quickly catch Norris. Even without Norris' error, Hamilton was going to easily claim the lead and the win.

It wasn't a peerless performance from Hamilton, given his comparatively poor qualifying and struggles to overtake on Sunday, but any driver achieving a 100th victory, along with taking the championship lead, would certainly regard that as a clear win! 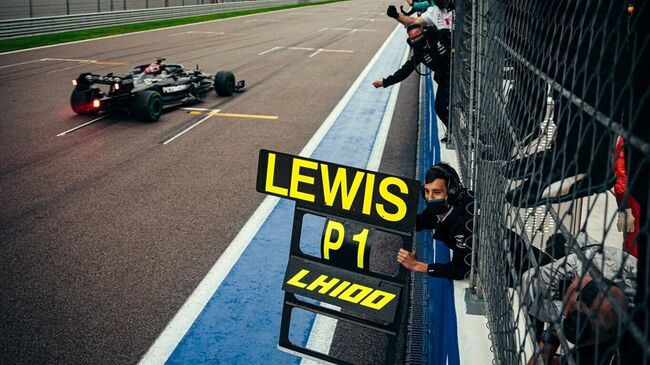 Carlos Sainz had to lead the Ferrari charge on Sunday as a result of Charles Leclerc's engine penalty, and the Spaniard appropriately rose to the occasion. Having had a tremendous qualifying result, Sainz took the lead into Turn 1 after using the effect of the slipstream to clear Norris.

While Norris gathered himself back up to eventually pass the Ferrari, Sainz hung on throughout his stint on the Hard tyre to contend for the podium against Fernando Alonso.

There were no doubts on his side about the switch to the Intermediate tyre, timing the change well to claim the final step on the podium.

Leclerc also fared well, up until the rain, but left the decision to change over too late, sealing his fate outside the points after taking on his new engine components for the weekend. 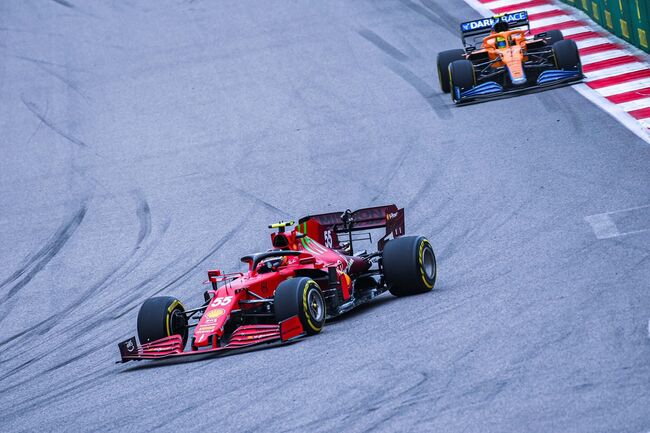 Having won at the highly specialised Monza circuit, any question marks over whether Ricciardo is truly back were answered in Sochi. While not quite able to match the highs that Norris managed, Ricciardo claimed a very strong fifth place in qualifying.

Making "too good" of a start meant the slipstream effect resulted in him losing out into Turn 1, but Ricciardo fought back to bring himself into contention for a podium towards the end of the race after the changeover to the Intermediates.

Despite missing out on beating Sainz to third place, it was nevertheless a clear indication from Ricciardo that his Monza win wasn't a one-off performance, and is sure to assuage any doubts he may have been internally hiding.

Fernando Alonso and Kimi Raikkonen both showed their experience on Sunday, with the Finn claiming his best result of the season so far on his return to action after sitting out the previous two races.

Raikkonen made a good start from 13th to rise to 10th, and teetered on the edge of the points throughout the dry phase. Once the rain started, he timed the switch to the Intermediates perfectly to climb further up the ranks. It was a case of right tyre at the right time, with Raikkonen's considerable experience paying off.

Alonso looked on for a podium finish, too, having shown great pace throughout the race. But, in contrast to Raikkonen's call, Alonso left his switch too late and fell down to sixth place. While he felt he should have been on the podium, it was still a tremendous showing from the Spaniard. 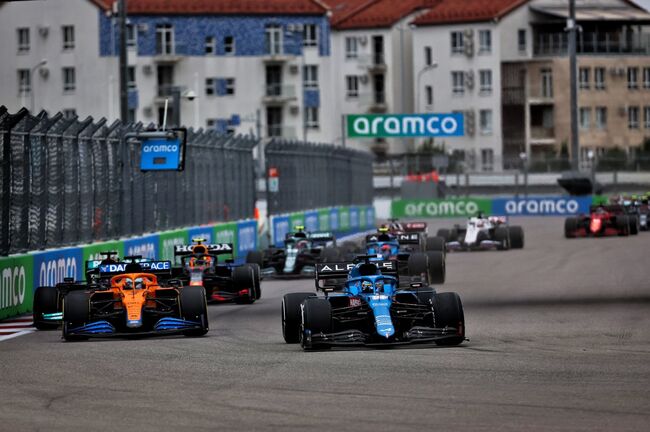 A truly anonymous race from Bottas, his eventual fifth-place saving him from the embarrassment of failing to score points during the dry phase.

Had Mercedes not used him as a guinea pig to gauge the changeover point to the Intermediates, Bottas might as well not have bothered to show up given the lack of difference he made. Starting in front of Verstappen after their respective penalties, he did little to slow down the Dutch driver's progress, and was easily passed by the Red Bull early in the race.

Having taken on yet another fresh power unit after his fourth engine developed an issue, it's not yet clear whether Bottas even has enough sufficiently fresh engines to get through the rest of the season without any further penalties.

At a track where he usually excels, it was a poor performance and, had Mercedes not elected to replace him already, would surely have been another nail in the coffin in the decision-making process. 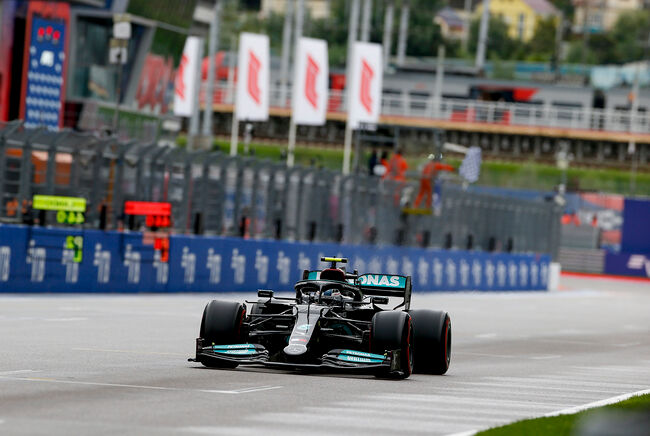 It actually wasn't a bad race from Checo, as he briefly looked capable of challenging for a podium result.

A long first stint on the Hard tyre even saw him briefly lead the race while others stopped, before the switch to the Medium tyre brought him back against the likes of Sainz. But the rain didn't work out for him, as Perez opted to stay out on the slicks in a bid to make the chequered flag.

Eventually capitulating and switching to the Intermediate, the call came too late to make the same impression that it had for Verstappen, and Perez was resigned to a ninth-place finish. While not a great result, it was otherwise a much stronger showing from Perez than has been seen in recent races. 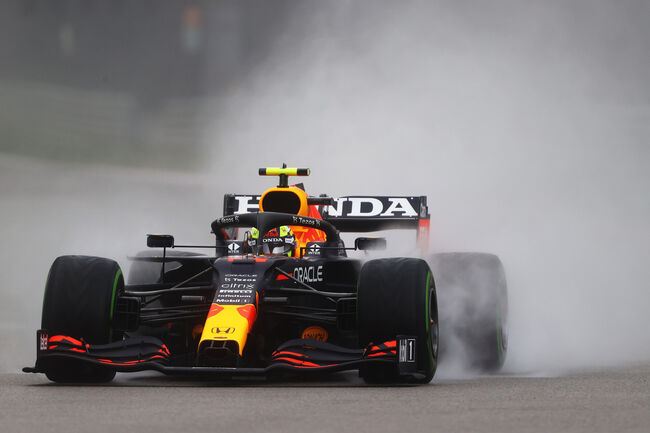 Sebastian Vettel was one of the stars of the race early on as he had a tremendous scrap with Leclerc that resulted in some breath-taking action between the pair.

Having looked on for a reasonable points finish, his race was almost completely ruined by his teammate as Lance Stroll failed to notice Vettel in his mirrors and shoved the passing German into the wall at Turn 10. Fortunately, both survived, but Vettel's race would be undone by staying out on dry tyres for too long as well.

Stroll, aside from causing problems for his teammate for the third successive race, would pick up a penalty for a collision with AlphaTauri's Pierre Gasly.

It was a race of poor execution for a team who, under their previous guises, would usually have been the likely candidates to do well in such circumstances. 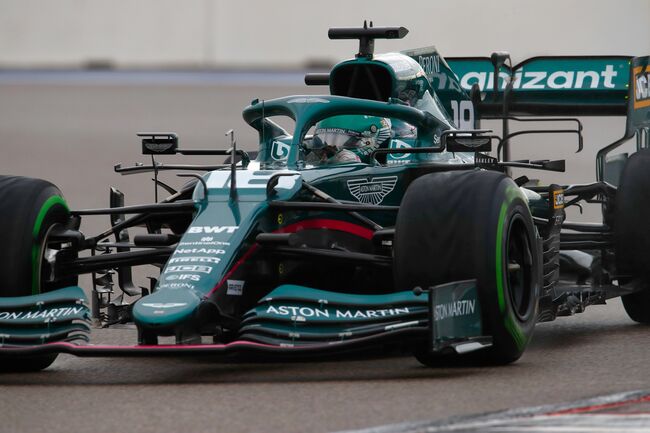