Why Andretti expects Hamilton/Verstappen fight will go to final race

Mario Andretti says he is "very anxious" to find out who will emerge victorious in the 2021 title battle between Lewis Hamilton and Max Verstappen. 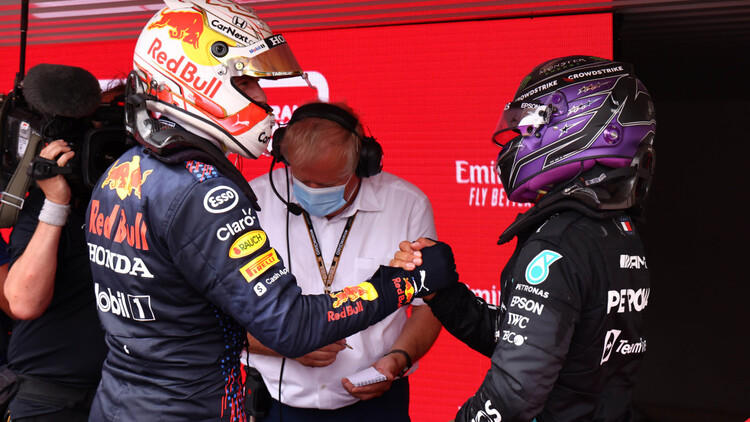 Mario Andretti reckons the title fight between Lewis Hamilton and Max Verstappen will go down to the final round of the season in Abu Dhabi, given the high level of performance both drivers have shown throughout 2021.

Just two points separate the pair following the Russian Grand Prix, where Hamilton claimed his 100th Grand Prix victory in dramatic circumstances, and Verstappen recovered from the back of the grid to second, having taken an engine penalty.

With seven races remaining, and Verstappen leading Hamilton 7-5 in the victory head-to-head so far this season, Andretti feels the championship is too close to call.

"I think the battle is going to go right to the last race," 1978 World Champion Andretti told RacingNews365.com in an exclusive interview during the latest triple-header sequence. "I can't see it [happening] any other way, which is good.

"They're both almost on equal ground. Each one can on any given day get the job done, that we have seen."

Andretti pointed to the Dutch Grand Prix, where Hamilton and Verstappen most recently went head-to-head for a full race (prior to their clash in Italy and starting at opposite ends of the grid in Russia) as an example of how tense the battle has been.

"At Zandvoort, any misstep on either side could have made a big difference," said the 12-time Grand Prix winner.

"I watched the strategy that Red Bull played, they just played right off of Mercedes, let Mercedes make the first move – it was brilliant. All the calls were good.

"Max had to really work for it, but that's the way it's supposed to be."

Andretti added that the scrap between Verstappen and Hamilton, along with many other sub-plots throughout the field so far this season, has left him feeling more excited than ever about watching F1.

"There's nothing new to see Mercedes being so dominant in the last few seasons, but to see the mix-up that we've seen this season… it's not as predictable, which is always a good thing," he commented.

"With Max being on the game, [Red Bull designer] Adrian Newey providing him with the equipment and Honda doing their job, it looks like Red Bull are a serious contender to the Mercedes team.

"Then you see the resurgence of McLaren as well, even Williams all of a sudden throwing some punches, and seeing [Esteban] Ocon win with the Alpine. There was some really, really good stuff so far.

"I'm very anxious now to see how this thing [the title fight] will unfold! I look forward to a Formula 1 race more than ever right now."