Who's the favourite for pole position in Qatar?

With the practice sessions at the inaugural Qatar Grand Prix now concluded, who is looking in good shape for qualifying? 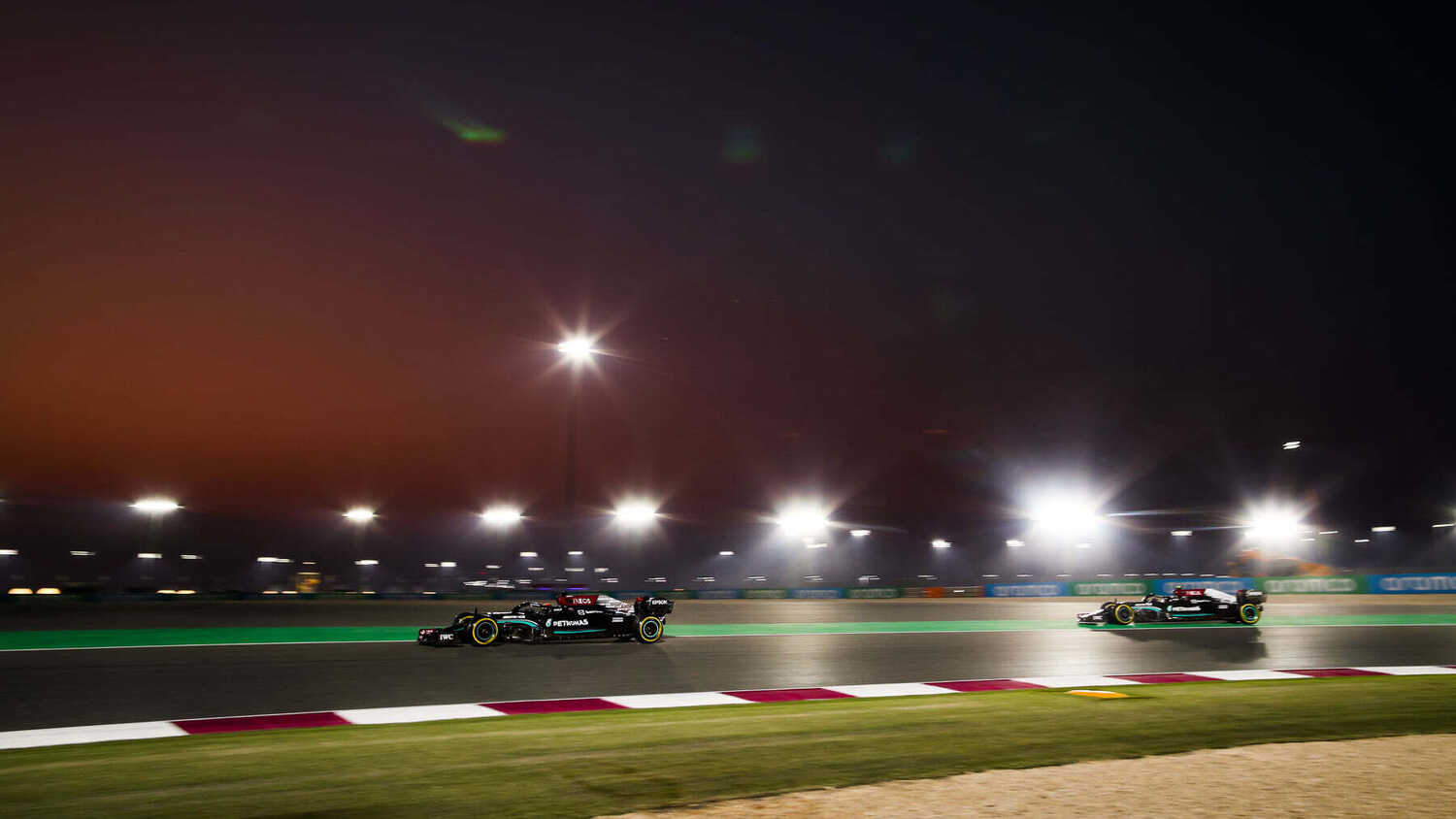 The three practice sessions at the Losail International Circuit have concluded, with attention now turning to the upcoming qualifying session for the inaugural Qatar Grand Prix.

Despite the wide-open swoops of Losail, overtaking is set to be particularly difficult at the circuit due to the lack of hard braking zones, as well as the flowing nature of the track preventing the current cars from following too closely.

Added to that, the lack of rain or unpredictability in the race means that qualifying could prove more crucial in Qatar than it is at many venues. With that in mind, who is looking good for the front row?

As the weekend has ramped up, so has Mercedes' pace. While Red Bull's Max Verstappen led the way in first practice on Friday afternoon, it's the second session results that are more representative of what to expect for the rest of the weekend.

That's due to second practice taking place after dusk, more closely matching the expected temperatures and track conditions that the drivers will face in qualifying and the Grand Prix.

On that occasion, it was Valtteri Bottas who set the pace with a 1:23.148. This was some two-tenths clear of AlphaTauri's Pierre Gasly, while the two championship rivals Verstappen and Lewis Hamilton were third and fourth and separated by less than a tenth.

That result led Hamilton to say that he felt "nowhere close" to the ultimate pace, with the reigning World Champion cutting a downbeat figure after the day's action.

Have Mercedes nailed their setup?

But the third practice session hinted further that Mercedes have nailed their setup ahead of qualifying. Bottas set the pace once again with a 1:22.310 on the Soft tyre, but Hamilton was fully in the mix as he and Bottas traded fastest times.

With the lack of degradation at Losail meaning drivers will likely plump for the Soft compound for Q2, it's all about outright pace, and this is where Mercedes currently appear to have the edge.

Even if track conditions do come more towards Red Bull in the evening, their three-tenths deficit in FP3 is no small margin.

Indeed, the latest analysis from AWS (Amazon Web Services) suggests that the fight for pole position will be fought solely between the two Mercedes drivers, and that Verstappen will have to settle for a distant third place.

Their data, gathered from FP3 sector times and car data, suggests a half-second deficit for Verstappen in qualifying. Should such a result unfold on Saturday evening in Qatar, it would be a major blow for Verstappen's title chances as he tries to defend a 14 point lead over Hamilton with three races remaining.

Best of the rest

AWS' data also indicates that Sergio Perez won't have it all his own way in fourth, as the Red Bull driver slots in behind Verstappen. Analysis of his times against AlphaTauri's Pierre Gasly results in just a 0.008s time difference between the pair, meaning Perez will have to bring his A-game to line up alongside his teammate.

Behind Gasly, the two Ferraris continue where they have been in recent races and are almost inseparable. Analysis shows that Carlos Sainz has had marginally better single-lap pace, putting him about a tenth clear of Charles Leclerc.