Visser: There was someone watching over me during Eau Rouge crash

W Series driver Beitske Visser said she feels someone was watching over her as she escaped relatively unscathed from a huge crash at Eau Rouge over the Belgian Grand Prix weekend. 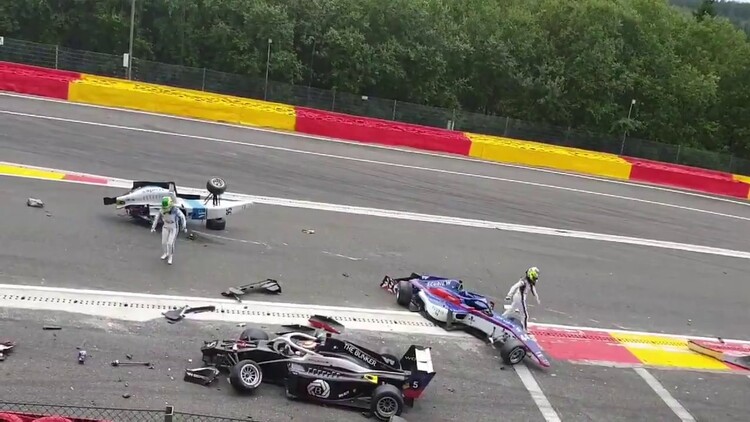 Beitske Visser has praised the safety of the W Series car, a Tatuus F3 T-318 made to FIA F3 grade standards, after she climbed out of it following a horrific accident at Eau Rouge over the Belgian Grand Prix weekend.

With W Series part of the Formula 1 support programme at Spa-Francorchamps, Visser approached Eau Rouge just as rain began to fall on the circuit during qualifying. Sarah Moore lost control of her car in the increasing damp, spinning off backwards into the barriers as all the following cars also lost control and piled up on top of each other.

Visser proved to be the hardest hit, with her car ending upside down on the racing line at the top of Raidillon after Moore, Abbie Eaton, Marta Garcia, Fabienne Wohlwend, Ayla Agren and Visser had all piled into each other. Fan footage showed Visser was able to extract herself from underneath her upturned car, before promptly collapsing in apparent agony at the side of the track.

All six were taken to the Medical Centre at Spa, with Visser and Agren transferred to hospital for further checks before being released.

"Yeah, I think I'm doing well for what I can expect," Visser told media, including RacingNews365.com.

"It was a big accident. So I think I'm very lucky that I'm relatively OK. Just quite sore. But yeah, I'm doing well.

"I came up to Eau Rouge and I think it started raining. The lap before, it was dry. Two cars in front of me were already losing the rear so I lifted off but when the corner was wet, I just lost the rear as well.

Explaining why she collapsed at the side of the track after climbing out, Visser said she felt pain that she hadn't realised until after the initial shock of the moment had passed.

"Yeah so, as soon as I was stopped, I realised I had pain, but I saw fuel coming out of the car so I wanted to get out of it as quickly as possible. And yeah, then once I started walking, I realised my legs were hurting as well. So I had to sit down," she commented.

"They first took me to the Medical Centre. And then they took me to the hospital. They just took me through lots of scans, some X-rays. So yeah, just had to wait for the results. Once the results were clear, and there were no fractures, it's a bit of a relief. I still have pain but, at least, a little bit less worrying."

With a lack of information about the status of the drivers being made available through television broadcasts, Visser explained that her family had been very worried and didn't get word on her condition until quite some time after the crash.

"Yeah, they were very shocked because they were watching at home. And they just saw the crash, but then there's no replays, which is usually not a not good sign," she said.

"So it took quite a while for them because I only got to speak to them once I was in the Medical Centre, which was like 40 minutes after. All they were seeing was the videos on social media. At least there was one video where they could see me getting out of the car so that made them feel a bit more comfortable."

With calls for changes to be made to Eau Rouge and Raidillon after a spate of horrible accidents on the hill, including the tragic death of Formula 2's Anthoine Hubert two years ago, Visser said she didn't know how best to approach improving the safety of the corner.

"I think this crash was just an unlucky situation, with suddenly having a local rain shower in that corner. I think, if it happened in another corner, it would have been a crash as well but probably be less [of an] impact," she said.

"I don't really know what they can do to change it, because you can't really make the run-off bigger, because it's a cliff behind.

"There is a bump, but it's been there before as well, as far as I know. The corner is supposed to be flat out and I was lifting already because I started spinning. It was definitely the rain because the lap before I went into it much quicker."

Praising the safety of the car she climbed out of, Visser revealed she felt as though she had had a guardian angel on her shoulder.

"I think if you look at the crash, and you see that I had three big hits from different angles and I got out of the car by myself, I think there was definitely looking someone looking over me," she added. "And yeah, it also definitely proves that the cars are very safe."