The end of the Azerbaijan Grand Prix won't be forgotten soon. After Max Verstappen retired from the lead in the closing laps, rival Lewis Hamilton threw away a golden opportunity to gain points on his rival. His mistake sent Toto Wolff into a frenzy. 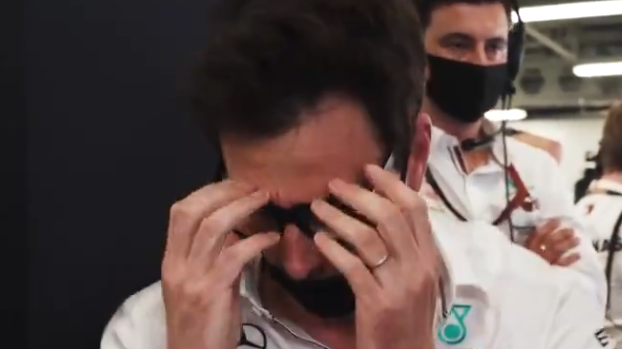 Just when it looked as though Lewis Hamilton was set to retake the lead in the Drivers' Standings, a late blunder by the Mercedes driver cost him dearly with Toto Wolff's reaction saying it all.

The British driver looked set to finish third behind Max Verstappen and Sergio Perez, however a late tyre failure sent the Dutchman crashing and brought out the red flag. Eventually the race resumed with a standing start, with Hamilton getting off the line well.

However just when it seemed as though the Mercedes driver was set to take the lead, an uncharacteristic error saw him head for the escape area after a brake setting was in the incorrect position. As a result Hamilton finished outside the points, with Wolff beside himself while watching it all unfold.

You can watch Wolff's reaction in the video below.