Aston Martin's Sebastian Vettel has said that teammate Lance Stroll's immediate comfort with the car meant him getting updates first makes most sense. 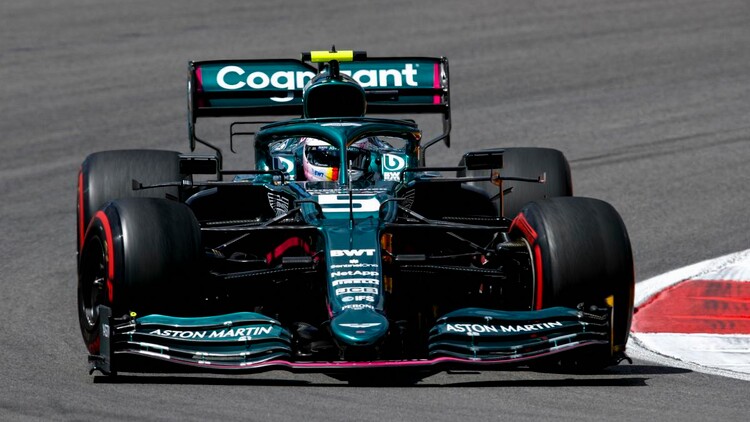 Aston Martin's Sebastian Vettel has said that he's completely comfortable with teammate Lance Stroll getting the first updates to the AMR21.

Aston Martin have rolled out some minor aerodynamic updates to their car for the Portuguese GP, but only had enough parts to give them to one car for this weekend. Lance Stroll was given the new parts, with Vettel having to wait until the Spanish GP to get his.

Asked whether he's comfortable with that decision, Vettel said it made most sense, as Stroll is the one who is considerably more at ease with the car at this point.

Vettel outqualified Stroll on Saturday, with the Canadian driver knocked out in Q1. Vettel went on to be one of the stars of the session, making it into Q3 on the soft tyre and qualifying in 10th.

"In the end, obviously, we have a big split between the cars now in terms of qualifying positions, just the other way around like last races," Vettel explained. "Ideally, we haven't closed it together to also work a bit more together in the race.

"I think we still have to want to improve. So yeah, I think we were still learning about the car. So let's see, I think obviously it's going to be a long season but these couple of races now are very crucial to get on top of it. We're still changing a lot of things one session to another to just explore the limits."

Asked about whether he's learning anything from Stroll's experience with the car from it being the Racing Point RP20 last season, Vettel said there's always knowledge to be gleaned in both direction.

"He has a different style," Vettel explained. "So, obviously, every teammate is a bit different and I think there's definitely in terms of approach, driving some corners, quite a bit of a difference that I can learn from and probably the same thing the other way around.

"I think he had a good start to the season and definitely was more comfortable and faster than me in the beginning. So hopefully we'll get closer now at the next races."