Stoffel Vandoorne will start from the front of the grid in the first of this weekend’s Formula E races at the Circuit Ricardo Tormo in Valencia after a close qualifying battle with just over a tenth of a second separating the top six drivers. 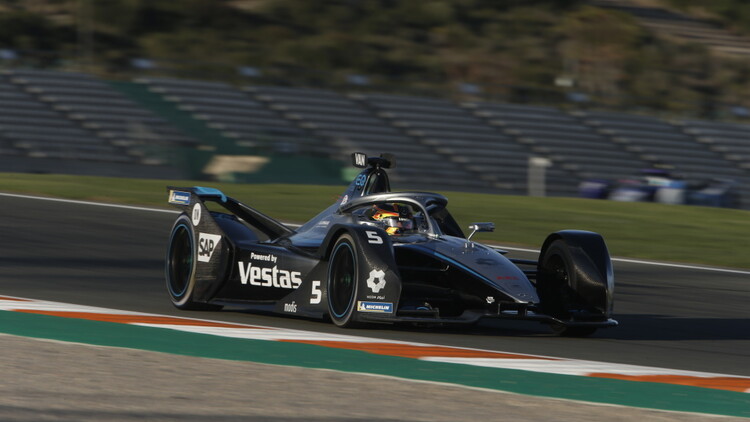 Mercedes EQ driver Stoffel Vandoorne will start from pole position at the Valencia E-Prix later today after the Belgian driver salvaged a tough start to his super pole lap to top the grid with a time of 1.26.494.

Vandoorne won the last race in Rome, and carried that form over in both the initial qualifying groups and the super pole runs to top the timing charts and continue Mercedes’ strong start to the Formula E season.

Antonio Felix da Costa put in the best time during the first practice session, and was able to improve upon his group qualifying time to go second on the grid after the super pole laps, with his teammate and winner of the first Rome E-Prix Jean Eric Vergne down in 13th.

Mahindra Racing’s Alexander Lynn was the fastest overall in the initial qualifying groups, putting in a time of 1.26.799, just four hundredths ahead of Vandoorne, but was unable to convert that form in super pole and will start the race in fifth.

BMW i Andretti Motorsport driver Maximilian Guenther was the fastest man on track during the second practice session earlier this morning, but he was unable to convert that into pole position after dropping three tenths in the middle sector during his super pole lap, eventually ending up in fourth.

Vandoorne’s teammate Nyck de Vries qualified in third in the super pole shootout with a time of 1.26.730 despite a few moments of oversteer, but will start from seventh due to a five-place grid penalty carried over from his collision with Jaguar’s Sam Bird and Nissan E.Dam’s Oliver Rowland last time out in Rome.

Championship leaders Jaguar Racing will start towards the back of the grid after Sam Bird and Mitch Evans both suffered lock ups into the final chicane in the first group out on track, qualifying in 21st and 18th respectively seven tenths off the lead.

The first Valencia E-Prix race of the weekend starts at 13:30 BST.