Lewis Hamilton will start the second round of the 2021 Formula 1 championship from pole position ahead of Red Bull's Sergio Perez and Max Verstappen. After a thriller in Bahrain, will Imola provide the same excitement? 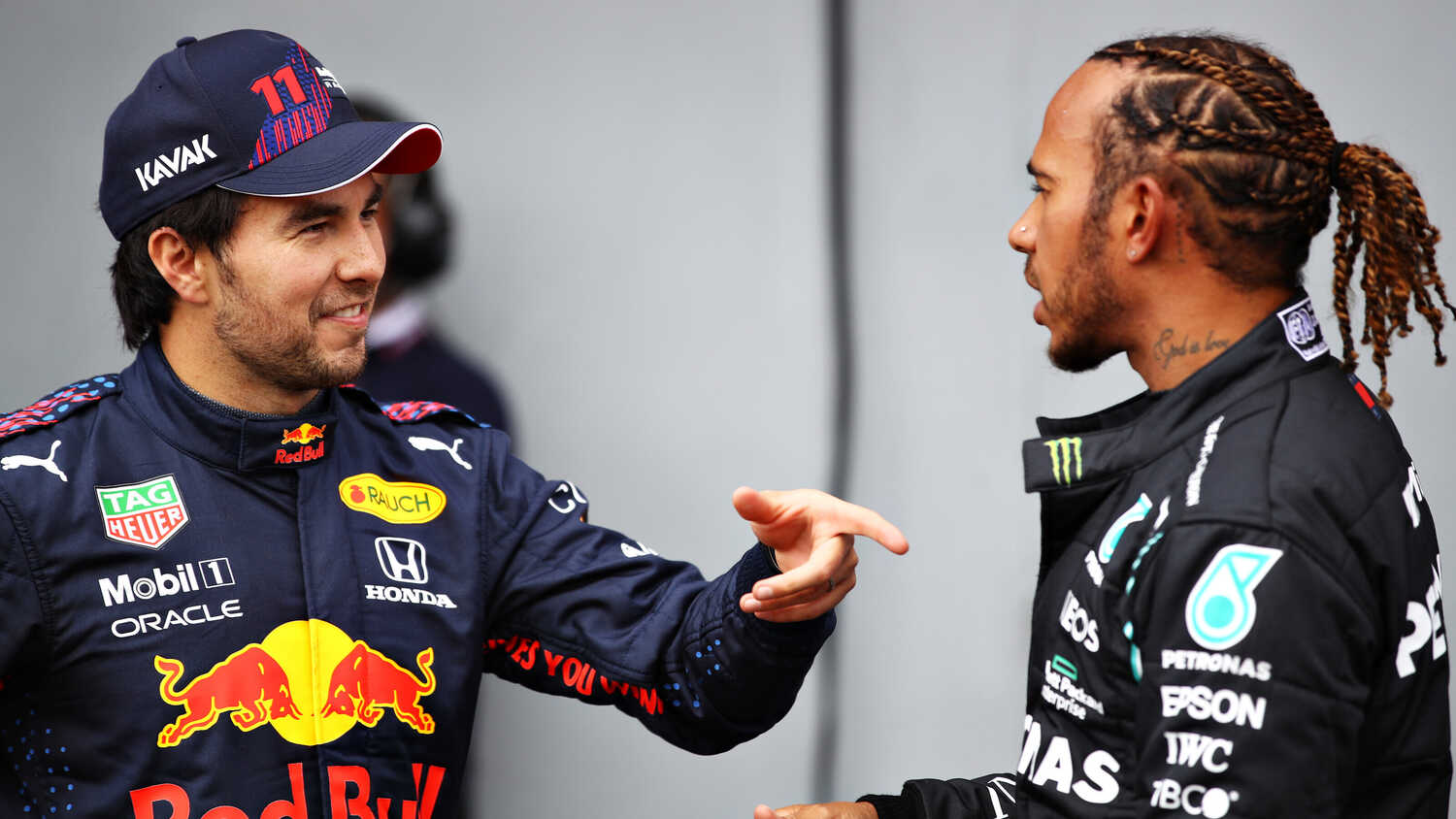 Mercedes and Red Bull are set to battle for victory at the Emilia Romagna GP, three weeks after the thrilling season-opener which saw Lewis Hamilton fight his way to the win over Max Verstappen.

It could be Hamilton versus Verstappen once again who battle it out over 63 laps of Imola but Red Bull have Sergio Perez on the front row of the grid which could be crucial in terms of strategy.

With Perez starting on a different tyre compound compared to his rivals, Red Bull can play with their strategic options.

The C4 (soft), C3 (medium) and C2 (hard) tyre compounds are being used in Imola, the same rubber as the season-opening Bahrain GP.

"The 63-lap race is almost certain to be a one-stopper for most drivers," Pirelli told the press. "Firstly, it's hard to overtake around the narrow confines of Imola; secondly, the pit lane time loss is high at nearly half a minute; thirdly, the wear and degradation on the tyres is reasonably low.

"A two-stopper will definitely be slower, so the teams will look to avoid that if possible. Track position is key and steering clear of traffic is important, so the timing of the stop will be critical.

"An advantage can often be gained by 'undercutting' direct rivals, so the selected strategy has to consider this as well." 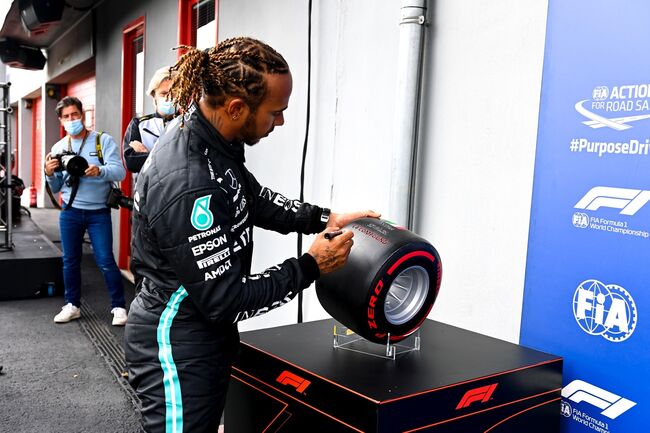 Perez will start on the front row of the grid for the first time in his Formula 1 career. Red Bull opted to put Perez on the soft tyre compound for Q2 which means he still start the race on the soft tyres whilst Hamilton and Verstappen are on the mediums.

In theory, this should give Perez a grip advantage off the line which could see him alongside or ahead of Hamilton on the run down to turn one.

You would expect Red Bull to tell Perez to risk it all to get ahead of Hamilton at the first chicane in order to give them the upper hand. It could be a dramatic opening lap of the Grand Prix.

"If it stays dry, we've seen so far that all three compounds should have an important role to play in the race," state Pirelli.

"Those starting on the soft tyre don't face a particular disadvantage however, as Imola is a low-severity circuit for tyres and weather conditions are expected to be cool."

Perez should also have an advantage on the opening laps since it's significantly easier to warm-up the soft tyre compared to the mediums. He is excellent at managing the Pirelli rubber so if he can get out in front in the clean air, the Mexican could upset Hamilton and Verstappen today. 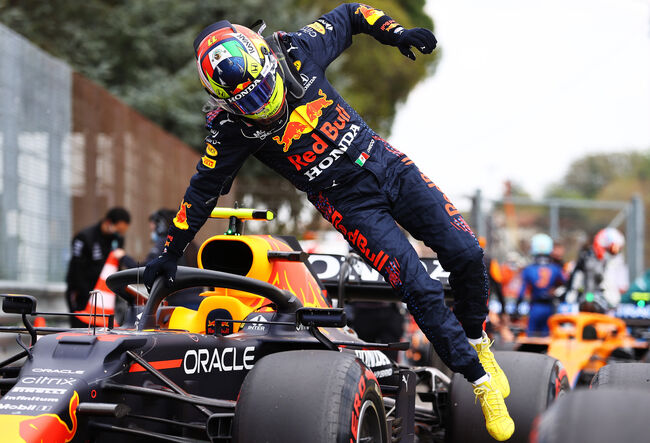 A repeat of the same amount of drama that Hamilton and Verstappen delivered at the Bahrain GP is possible in Imola.

Both drivers start on the medium tyres and you would expect the pair to have a slight pace advantage over Perez.

Verstappen will have to be weary to not lose any places, especially to Charles Leclerc who starts on the soft tyres. Remaining in the top three is vital for Verstappen's race.

All will not be lost for Hamilton if he is not in the lead after lap one but he will likely be fighting two Red Bull drivers by himself due to Valtteri Bottas' poor qualifying.

“If we’re able to get off in order then they obviously have a bit of a better set of cards in terms of strategy,” Hamilton told RacingNews365.com and other select members of the press.

“But that doesn’t mean we can’t pull out something unique and do something different."

If Hamilton is in the lead, he may drive relatively slowly to keep the field bunched up to decrease the chances of an undercut threat. 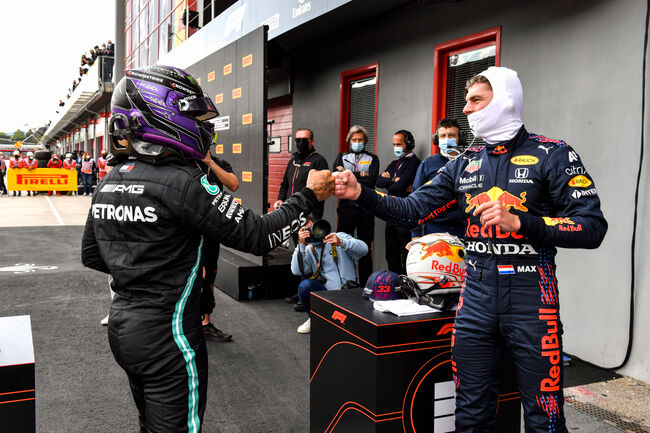 A fierce battle broke out in Bahrain with plenty of overtakes throughout the field. It will be trickier to go wheel to wheel in Imola but the pit stop phase for the midfield runners is certainly going to be exciting.

Leclerc and Pierre Gasly start fourth and fifth, both showing strong pace on the Friday long runs but McLaren will make things difficult for the Ferrari and AlphaTauri drivers.

Lando Norris has been riding on a high and will be eager to get the jump on teammate Daniel Ricciardo so that he is not stuck behind the Australian in the opening stint.

Valtteri Bottas is the only other driver (outside of Hamilton and Verstappen) in the top 10 who begins his race on the medium tyres. He may decide to run long to try and overcut the likes of Norris, Ricciardo and Gasly.

Further back, the drivers from 11th down to Yuki Tsunoda at the back have a choice of starting tyre.

Should any of those drivers choose to start on the hard tyre, that will provide critical information for the rest of the grid as to whether the hard compound is working well on the rubbered-in race track and the cooler temperatures that are similar to Friday.

Is a two-stop race possible in Imola?

Last year in Imola, some of the field including the leading runners executed a two-stop strategy. This was due to a timely safety car for Verstappen's tyre blowout.

A well-timed virtual safety car or safety car in the second half of the race could see some drivers gamble to throw on a set of fresh soft tyres which will make them very quick on the restart.

Daniil Kvyat in particular benefited from this strategy in 2020 on his way to fourth place. It will also be interesting to see whether the medium or hard tyre works best in the cooler temperatures.

Hamilton, Verstappen and Bottas will almost certainly use the hard tyre for their second stint but the drivers starting on the soft tyre do have the option to run the mediums to the chequered flag.

Stay tuned right here on RacingNews365.com for all the build-up and our coverage of the Emilia Romagna GP itself.