The Qatar Grand Prix was a successful day for Alpine, with Fernando Alonso finishing on the podium whilst Esteban Ocon came home in fifth. But how did they manage to avoid the tyre issues that affected others? 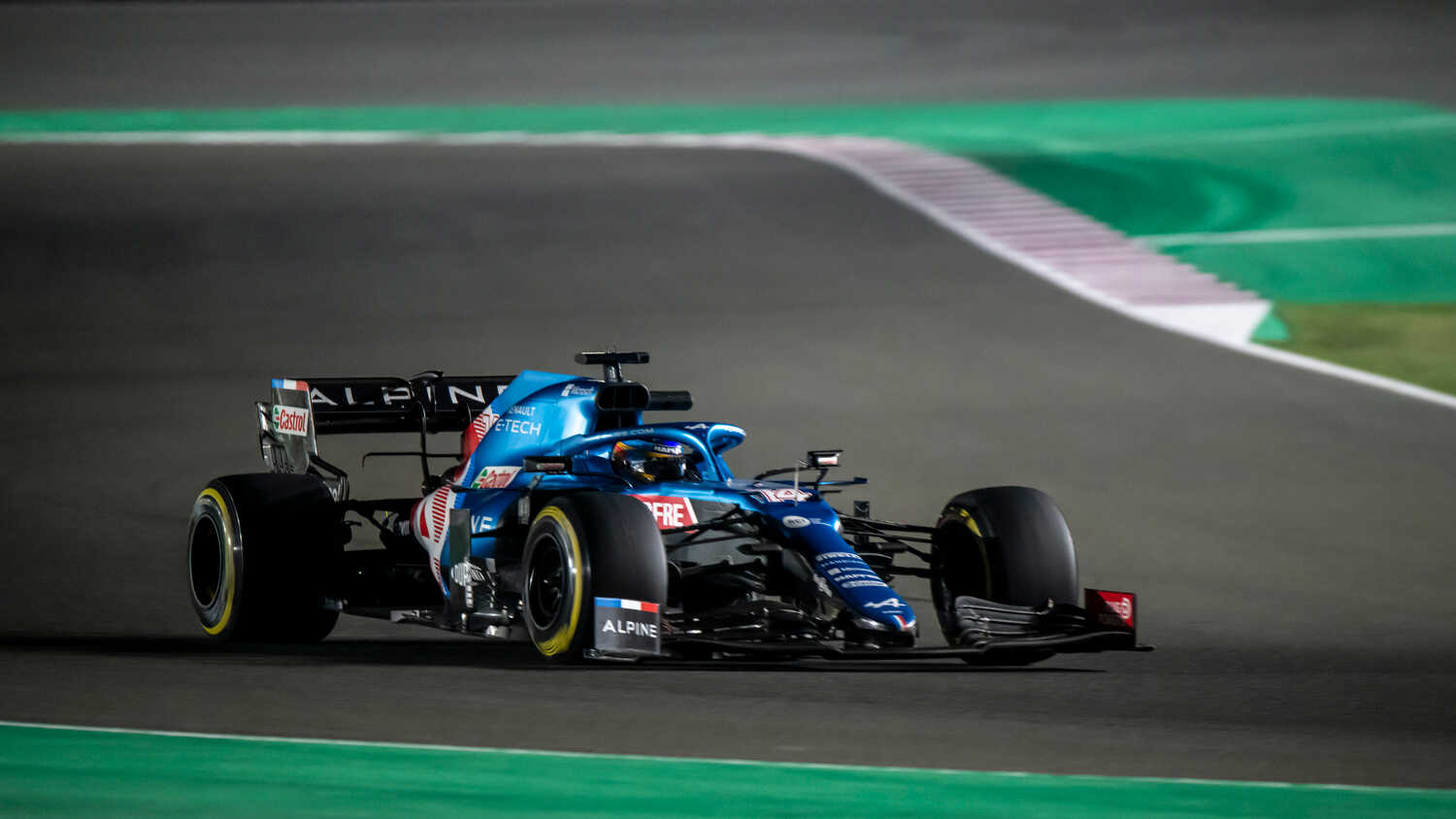 Fernando Alonso and Esteban Ocon were able to hold on to their impressive positions in the Qatar Grand Prix thanks to careful tyre management combined with good fortune, according to former F1 driver Jolyon Palmer.

It was one of the strongest races of the year for Alpine, with Alonso putting in a determined drive to secure his first Formula 1 podium in seven years. Meanwhile teammate Ocon finished in fifth, resulting in a double points finish for the French manufacturer.

Both drivers managed to avoid the tyre issues that affected several others. The likes of Valtteri Bottas, Lando Norris and both Williams cars were hit with punctures during the race, and this seemed to suggest that those attempting a one-stop strategy on the Hard tyre might struggle to get to the end of the Grand Prix.

This was not the case for Alpine, though.

"When Norris also had the same [puncture] problem [as Bottas and Williams] after just 23 laps on the Hard tyre from fourth place, it promoted [Sergio] Perez up, and it seemed at that stage that everybody else on a Hard tyre one-stopper might struggle to make it to the end," Palmer wrote in his column for Formula1.com.

"Management was critical, but the only way to manage a tyre that's on the brink of its life like that is to sacrifice a lot of lap time, by reducing minimum speeds through the right hand fast corners - of which there are plenty in Losail - and staying off the kerbs as well, which naturally tightens the corners.

"Alonso, and Esteban Ocon behind, set about doing that to try and hold on to their lofty positions. For Ocon it meant that a queue of cars started forming behind in a battle for fifth, but like Bottas he still had enough pace in the car when he needed it to stay out of arm’s reach of Lance Stroll behind at the critical points around the lap."

As well as sacrificing lap time to manage the tyres, Alpine were also assisted by the timing of the Virtual Safety Car.

"Alonso, meanwhile, was being hunted down by Perez, but was given a significant reprieve when the VSC was declared for marshals to clear [Nicholas] Latifi's stricken Williams," Palmer explained.

"Everyone who was sweating about their tyre life could breathe easier. Two laps under VSC meant that they could put no stress through the tyres, spare themselves two laps of work and all gaps to the cars around remained the same.

"In the end Alonso held on to the podium by three seconds to Perez, who was catching at one to two seconds per lap. Without the VSC it seemed that Alonso and Perez would have been right together onto the final lap, and that's assuming Alonso's old hard tyres didn’t puncture like some others had done."

The risk paid off for Alonso and Alpine, and Palmer was pleased to see the two-time World Champion back on the podium again for the first time since 2014.

"Alpine's Executive Director Marcin Budkowski explained afterwards just how marginal it was for the team, but these are often the risks you have to take for an underdog team to get onto the podium," Palmer said.

"It was brilliant to see Fernando back up there. He became the 13th different driver on the podium this season. and with his overall performances this year, not least on the weekend in Qatar, it was absolutely deserved."

Alpine's strategy, good fortune and team work - with Ocon having happily played a supporting role to Alonso, as the Spaniard had done for him at the Hungarian Grand Prix - helped the team to boost their points standings in the Constructors' Championship.

They now sit in a strong fifth place, 25 points ahead of nearest rivals AlphaTauri.