In Formula 1, it's often said that your teammate is your biggest rival. Here are five cases where drivers tested that theory to the absolute limit and beyond. 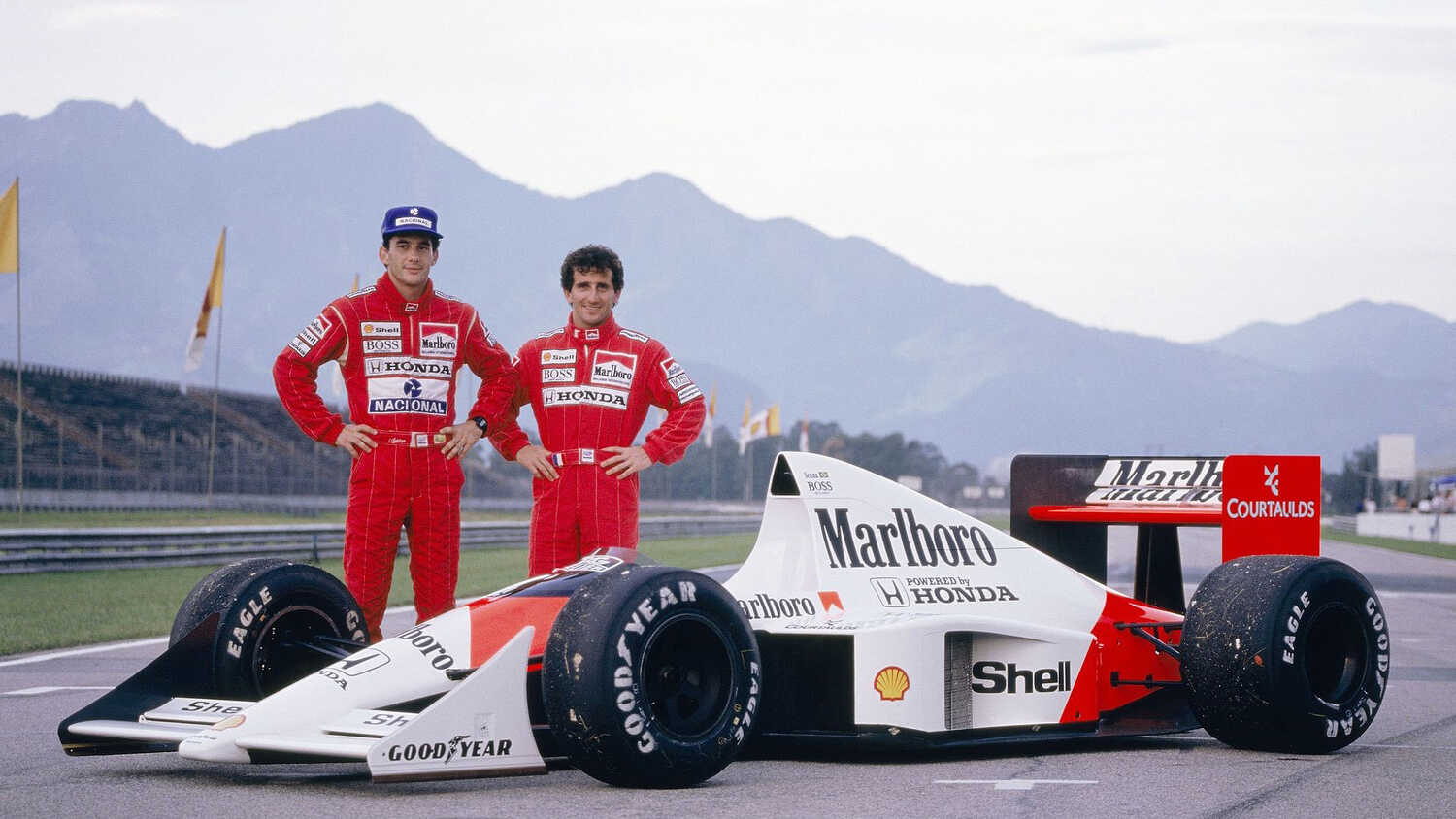 Whether you're in the best or worst car, if you finish ahead of your teammate in Formula 1, you can usually class the season as a success. But, as history has shown, this can often lead to disaster.

F1 drivers are a competitive bunch and some will stop at nothing to prove they are the best, so we've picked out five famous teammate battles throughout the years. 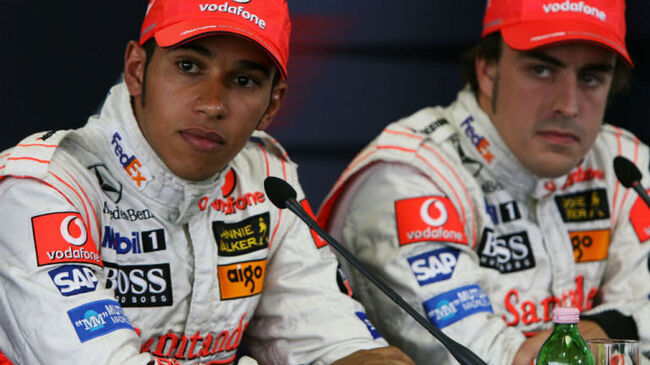 It didn’t take long for things to turn sour between these two feisty racers. Alonso was the defending two-time world champion so was perhaps taken aback by the immediate threat posed by his rookie teammate.

Tension really started to mount when Hamilton got the better of Alonso at the Canadian Grand Prix and, just one race later, the Spaniard raised his fist in frustration to his team on the pit wall after losing out to the youngster for the second successive race at the US GP.

However, the most infamous incident came at a dramatic qualifying session for the Hungarian GP. After feeling aggrieved that his teammate hadn't followed orders, Alonso sought immediate retaliation and blocked Hamilton in the pits ahead of their final qualifying runs. As a result, the Brit was unable to set a time and Alonso picked up a five-place grid penalty for his actions.

But it didn't stop there. The incident sparked a chain of events that led to McLaren’s disqualification from that year’s constructors’ championship as well as a $100 million fine after what is now known as the ‘Spygate scandal’.

It’s little wonder Alonso’s relationship with team boss Ron Dennis had broken beyond repair and, when the season was finished, the Spaniard quickly announced his return to Renault. 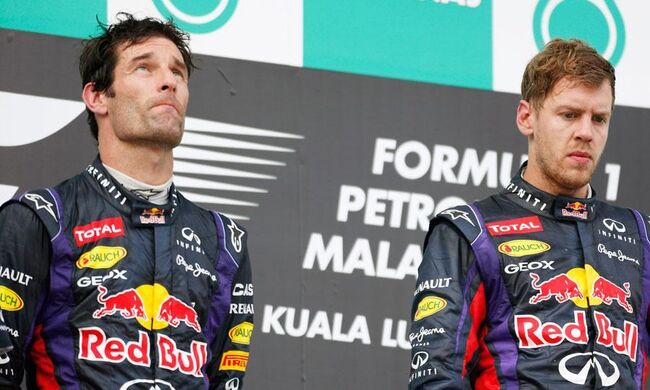 Prior to the Hamilton-Rosberg era, this rivalry seemed about as toxic as it gets for a while. After finding form towards the end of the 2009 season, Red Bull were in the hunt for their first Formula 1 title in 2010, and both of their drivers were right in the mix too.

Cracks began to show not just between the teammates, but between Webber and the Red Bull management, at the 2010 Turkish Grand Prix. Battling for the lead, the pair collided forcing Vettel out of the race and demoting Webber down the pecking order - although he would finish third. And in the aftermath, the Australian took exception with Helmut Marko as he believed the Austrian blamed him for causing the crash.

This feeling of being disadvantaged was further evident at the British GP of that year as, after starting from second and winning the race, Webber said over the team radio: "Not bad for a number two driver", in reference to the new front wing the team decided to fit on only Vettel's car.

Perhaps most famous though was the incident at the 2013 Malaysian Grand Prix. After the final round of pit stops, Webber led Vettel and both drivers were ordered to turn their engines down in order to preserve the one-two finish. But the German had other ideas and went on to attack and pass his teammate leading to an awkward post-race scene where Webber could be heard uttering the ignored team order repeatedly: "Multi-21, Seb". 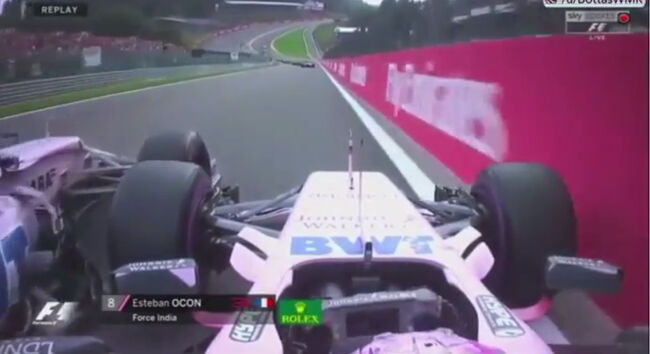 A dark horse in this list but during two seasons together, things got pretty heated between Esteban Ocon and Sergio Perez. Both eager to show what they could do in Formula 1, the teammates regularly found themselves fighting over the same piece of tarmac - and it rarely had a happy ending.

The pair came together not once but twice on the high-speed approach to Eau Rouge at the 2017 Belgian Grand Prix, forcing the Mexican out of the race and costing the team a host of points.

And this was the theme of their time together. A number of incidents occurred the following season and, after coming together on the opening lap in Singapore, the team eventually had to ban the drivers from racing each other. 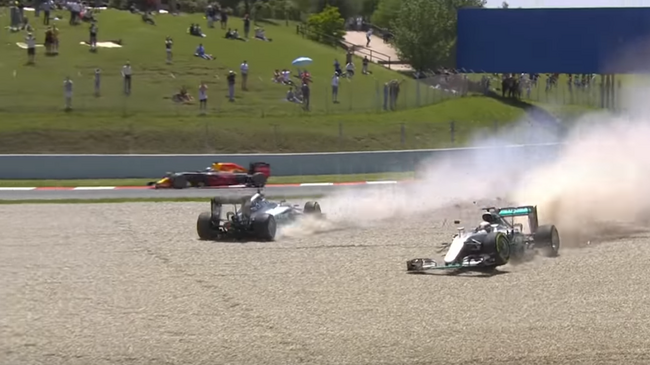 Lewis Hamilton and Nico Rosberg grew up competing in go-karts before making their way into Formula 1. And by most accounts, they were close friends in their younger years, so it would have been difficult to predict the feud that would ensue between the pair from 2014 to 2016.

The Brit completed his shock move from McLaren in 2013, but it wasn’t until the inaugural season of the turbo-hybrid era that Mercedes would become the sport’s dominant force. While that led to some brilliant on-track battles, cracks started to appear in their relationship as the season ramped up.

In Monaco, Hamilton was enraged when he suspected Rosberg had deliberately sabotaged his final Q3 qualifying lap, with the Brit later declaring the pair were no longer friends. Tensions rose again in Hungary before Rosberg was booed on the podium in Belgium for taking his teammate out on the opening lap with a move that could be described as clumsy at best.

Hamilton would have the last laugh, however, and went on to win the 2014 World Championship at the season-ending Abu Dhabi GP.

A more straightforward title followed for Hamilton in 2015 - minus the famous US GP cap throw of course - before an incident-fuelled 2016 saw the battle come down to the wire.

At the 2016 Spanish Grand Prix, the pair qualified on the front row, but their respective races would last a matter of corners as Rosberg’s stern defence against a charging Hamilton led to a collision.

And another dramatic coming together followed at the Austrian GP. Hamilton attempted to pass Rosberg on the final lap before the German ran into his teammate after seemingly forgetting to brake.

There was more controversy in Hungary and, after Hamilton suffered a series of mechanical failures, it all came down to the final race. Rosberg just needed to finish on the podium and Hamilton did all he could to ensure that didn’t happen, leading the race from the front and attempting to back his teammate into the clutches of the cars behind. Rosberg kept his cool, however, to win his first world title before announcing his shock retirement. 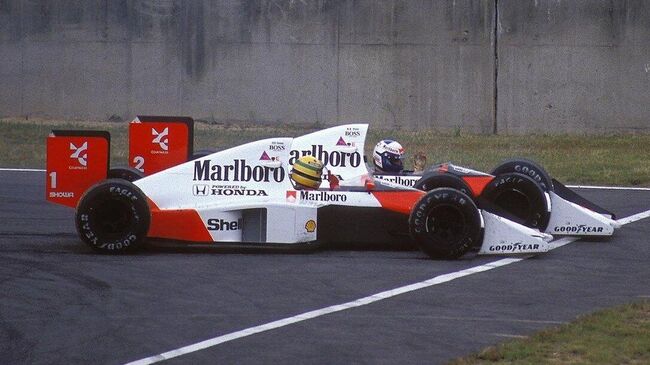 Perhaps the biggest rivalry in the history of Formula 1, Ayrton Senna and Alain Prost spent two years together at McLaren in 1988 and ’89, and it didn’t take long for tension to mount between the pair, with Prost believing Senna failed to obey a team order that had been put in place before the second race of the 1988 season.

McLaren went on to dominate that year, claiming 15 wins from 16 races, with Senna clinching the championship by just three points. But the rivalry had only just begun.

Keen to make amends the following year, Prost did everything in his power to wrestle back the world championship and it all came to a head at the championship decider at Suzuka. Senna needed to win to keep his title hopes alive and late in the race, made his move down the inside of his teammate at the final chicane.

It was a bold attempt, and the pair came together when Prost closed the door, but that wasn’t the end of the drama. The damage ruled the Frenchman out of the race, but Senna continued after being helped on his way by the marshals. And after pitting to repair his broken wing, caught and passed Alessandro Nannini for what appeared to be an epic race victory.

But his delight was cut short when he was disqualified after the race for re-joining the track illegally, meaning Prost won the championship with a round to spare. It remains one of the most controversial incidents in the sport’s history and brought Prost’s time at McLaren to an end as the two drivers could no longer stand the sight of each other, let alone work together.