Red Bull's Christian Horner says his team will protest against Mercedes in Qatar if they see any evidence of a rear wing trick on the W12 that they are suspicious of. 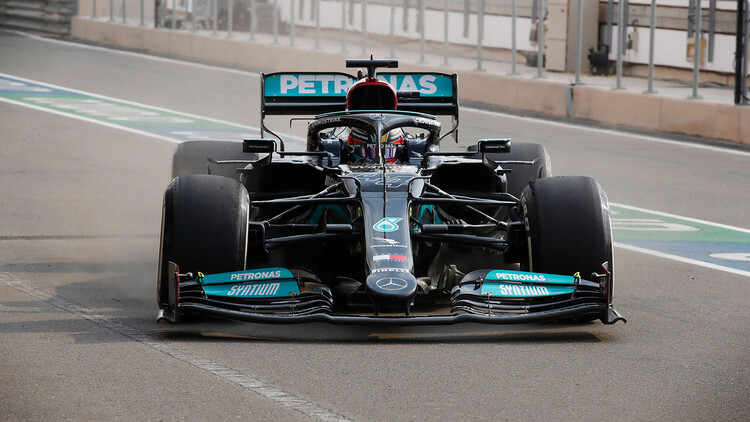 Christian Horner has said that, if his team spot any evidence of Mercedes running a rear wing trick that they have identified, Red Bull will lodge a formal protest against Mercedes with the FIA.

Horner brought up "score marks" that were spotted on the rear wing endplates of the Mercedes W12 in Brazil after Max Verstappen landed a €50,000 fine for going up to Hamilton's car after qualifying and touching the rear wing elements.

Asked specifically by Sky Sports about whether Red Bull are suspicious of Mercedes' rear wing somehow being able to reduce its drag as the speed increases, Horner bluntly said: "Yes."

The degrees of flexibility surrounding the rear wings are strictly defined by the Technical Regulations, with the more serious theory of movable aerodynamics being banned outright.

Red Bull's suspicions involve part of the rear wing that is not clearly visible on broadcast cameras, as the lower element is usually hidden by the upper flap.

"I think there are very specific regulations about this," Horner commented.

"Obviously, the directives that came out prior to Azerbaijan [when testing for flexi-wings was made more strict] had material effects and I think that this is something even more advanced, even more hidden in the way that it operates - it's harder to spot from a camera.

"But you can see the straight-line performance since Hungary, and particularly in the last two Grands Prix, has gone exponential. That obviously concerns us and that's why Adrian [Newey, Red Bull's Chief Technical Officer] and Paul [Monaghan, Chief Engineer] have been discussing it with the FIA."

After not protesting against Mercedes in Brazil, despite their grumblings, Horner and Helmut Marko both admitted that they were hoping to uncover more evidence about Mercedes' supposed secret.

Having apparently found that, Horner said the team will protest this weekend in Qatar if they have suspicions it's still being run on the W12.

"Make no bones about it, if we see it on the car here, it will be protested," he said.

"I think that [it's] probably less of a factor here, although we obviously saw significant straight-line speed in that session [FP2] of probably seven kilometres difference between our cars.

"Particularly [in] Jeddah and Abu Dhabi, you could have a situation like Brazil where the car is quite simply unraceable."

Mercedes boss Toto Wolff was unperturbed by Horner's threats when told about what his Red Bull counterpart had said.

"I think that his opinion is his perspective," Wolff told Sky Sports.

"And [it's] absolutely fine within the regulations to seek clarification or protest. That's how things are in Formula 1."