Raikkonen to start Belgian GP from the pit lane

Alfa Romeo's Kimi Raikkonen will start the Belgian Grand Prix from the pit lane, after a change of parts overnight that broke parc ferme rules. 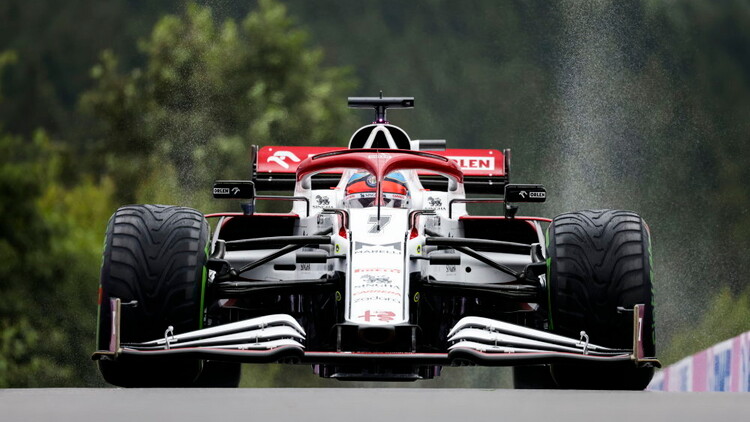 Kimi Raikkonen will start the Belgian Grand Prix, a race he's won on four occasions, from the pit lane.

The Alfa Romeo driver was knocked out in Q1 at Spa-Francorchamps on Saturday, finishing down in 19th place, and Alfa Romeo have opted to make a setup change overnight and take a hit on their starting position.

The rear wing assembly of the Alfa Romeo has been changed, likely from a dry spec to a higher downforce spec due to the rain, breaking parc ferme rules which prevent such changes without penalty.

As a result, Raikkonen will start from the pit lane.

"The part has been replaced with the approval of the FIA technical delegate following a written request from the team concerned, this being in accordance with Article 34.2 of the 2021 Formula 1 Sporting Regulations," read a short statement from the FIA.

"But as the above part is different from the one originally used, car number 07 should now be required to start from the pit lane according to Article 34.8b of the 2021 Formula 1 Sporting Regulations."

Raikkonen missed most of Saturday's final practice session as a result of a technical problem with the car, meaning he was using Q1 to figure out racing lines and build up speed.

"A bad day that started off this morning, missing out [on] the practice session in the wet. I had to use Q1 to figure out the lines but it turned out pretty shit," Raikkonen told media, including RacingNews365.com.

"I am sure that with a few more laps, we would have been a lot better. Not a lot of positives to take from today, but we can only go up tomorrow: we will try our best and see what we can get out of a race in these conditions."