Pirelli must be transparent in tyre failure investigations

Pirelli's investigations into their tyre failures in Azerbaijan are underway, and the tyre manufacturer must move quickly to ease fears over the quality of their 2021 construction 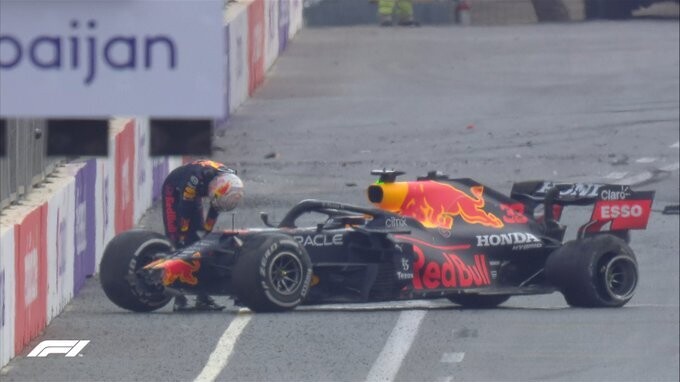 Pirelli are facing scrutiny once again, after the Azerbaijan Grand Prix winner was decided by Max Verstappen's left rear C3 tyre exploding with just five laps to go in the race.

Having controlled the majority of the race, the Dutch driver's tyre was 36 laps old at the time, well within the expected stint length for the compound, meaning that eyebrows are being raised in Pirelli's direction.

The failure came shortly after Aston Martin's Lance Stroll had a similar issue, with his left rear C3 failing at almost the exact same point of the track after just 29 laps on the compound.

It's a worrying situation for Pirelli, given that Baku isn't a particularly tough track on tyres in terms of wear, and the C3 compound is one of the most commonly used of the season. It's not the first time Pirelli have faced scrutiny over their tyres, with several failures happening just last year at Silverstone. In a dramatic end to the race, both Mercedes drivers suffered failures, as well as McLaren's Carlos Sainz.

It's also the second time in a year that Lance Stroll has crashed out hard due to a tyre failure. At Mugello last year, he suffered a puncture that sent him into the barriers in what was a huge accident for the Racing Point driver.

There's been technical changes to the tyres since. Pirelli's 2020 tyres (really a construction for 2019) were struggling to cope with the huge downforce levels of the cars, and the tyre manufacturer sought changes to the cars to reduce the forces being put through the rubber. These aero changes were made, while Pirelli also introduced a new 2021 construction that would be better able to cope with the demands.

But, has it been enough? The race in Baku was almost incident-free until Stroll's tyre popped, with precious little carbon fibre having been discarded onto the track surface. While Verstappen's failure could have been caused by debris from Stroll, just what was it that caused the initial failure? It's this concern that has Pirelli scrambling for answers.

The complete tyre sets of Verstappen and Stroll have been sent back straight away to Pirelli's base in Milan, as well as some other driver's tyre sets for comparison. Pirelli's Mario Isola explained to media, including RacingNews365, that the initial conclusion is that tyre wear was not to blame for the failures.

He also revealed that a five centimetre cut was found on Lewis Hamilton's left rear tyre, discovered during the red flag stoppage, and that Pirelli are getting the telemetry from the affected teams as there was no data to indicate a problem ahead of the failures.

They are also reviewing all available TV footage and circuit cameras to see if any debris can be spotted. Referring back to Valtteri Bottas' dramatic 2018 puncture, debris could be seen on the track on that occasion, unlike the 2021 failures.

"It seems that it is a cut due to debris because, as I said it's not the most stressed tyre, we have another evidence of another cut in the same position," Isola explained.

"Both the accidents happened on more or less the same part of the circuit and a few laps difference. We have other cars with the same number of laps, same tyres without any issue. So preliminary investigation is that it is probably due to an external factor or debris.

"But I don't want to jump to a conclusion now because now the plan is to have a thorough investigation and come back to a report to the FIA and the teams that hopefully will be before Paul Ricard."

Isola showed the media an image of Hamilton's cut tyre, explaining that it was clearly caused by debris, and estimated the cut was quite fresh at the time. This was due to the sharp angle of the cut against the surface, with an older cut more likely to have worn away somewhat.

While such debris hasn't been spotted yet, that doesn't mean it wasn't there. While at most tracks errant carbon fibre can end up in the gravel or grass, Baku's enclosed streets mean debris just gets blown along the circuit itself. It's entirely possible that Verstappen, and Hamilton's, cuts could have been caused by Stroll debris, with Stroll's failure in itself just an anomaly.

It's also worth remembering that in 2019, an errant manhole cover came loose during the weekend. These manhole covers are welded down, and it's possible that a sharp edge on a welded drain or cover could have cut the tyre - not an impossibility given it would explain why different drivers, on the same racing line, could have picked up cuts. 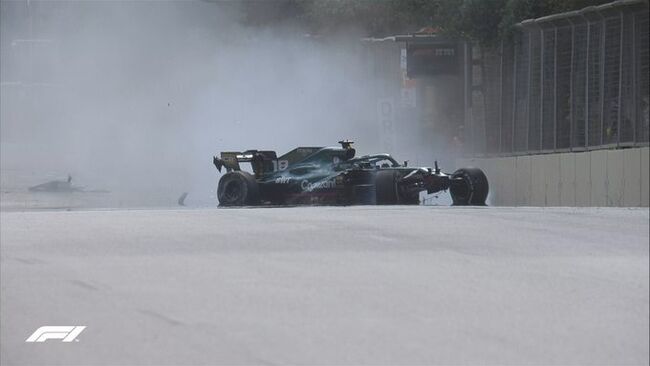 Did Pirelli have any hints ahead of the weekend?

Pirelli brought along their three softest compounds to Baku, citing the low-degradation low-downforce circuit as being ideal for the C1-C3 choice. This was a step softer than what was used in 2019.

But there was a change on Friday evening that suggested Pirelli weren't happy with something on track. Rear tyre pressures, which had been set at 19psi, were increased to 20psi. Isola explained this change was made in response to harsher conditions, particularly with regard to the serious traction demands of the Baku circuit stressing the rear tyres.

"The severity that we measured on telemetry is higher than the simulation," Pirelli F1 boss Mario Isola told Motorsport.com. "So we had to react with a fine tuning of the pressure.

"Our system is not taking into account only the speed, it's the speed, the load, the camber, the corners, there are many parameters that are making the equation, so it's not just one.

"What we can see from the telemetry is that the teams are stressing the tyres more – we need the real data to judge the real stress on tyres, otherwise we have to rely only on the simulation."

Was this faith in their simulations the root cause of the failures? Unlikely, given that the failures were so sudden and without any apparent correlation to tyre wear. But it's an extra consideration to be looked at during the investigations.

It's pure luck that the World Championship standings remain the same as they were pre-Baku, as Verstappen looked set to lose out massively. This would have been tremendously unfair on Red Bull given that the tyres are something completely outside the team's own control. No-one, not even the most ardent Hamilton fan, wants to see a World Championship decided on such circumstances.

It's also extremely lucky that the crashes didn't result in injuries, or worse. Had Verstappen's car gone left instead of right, he would have slammed into the pit lane entry barriers at near full speed. As it was, he came to a stop perpendicular to the racing line. Had Stroll been a bit more unlucky as his car settled, he too would have been sideways across the racing line at one of the fastest pieces of track on the F1 calendar. It doesn't bear thinking about.

While Pirelli are pushing the debris narrative straight away, and this is the likely explanation, they must be transparent if any other reason is the outcome. The drivers will be driving on these exact compounds at quite a few races this year, and must have the peace of mind they need to not have a sudden tyre failure at an inopportune moment.

If the Pirelli construction isn't up to standard, and higher compound selections need to be used as a result, they simply must make this admission if needed. The risks of trying to push forward with compounds that aren't fit for purpose are immeasurable and the FIA, understandably, are also very interested in finding out the reason.

"So as with any and all tyre failures that occur Pirelli and the FIA, together with the support of the respective teams, will do a full and thorough investigation," Michael Masi told media, including RacingNews365, "gathering all the data, available footage and so forth and have a look at what's available, what can be learnt and obviously, what caused them."