On this day: An angry Piquet punches a backmarker after being crashed into!

On this day, back in 1982, race leader Nelson Piquet was particularly annoyed after being taken out by a lapped car at Hockenheim.. 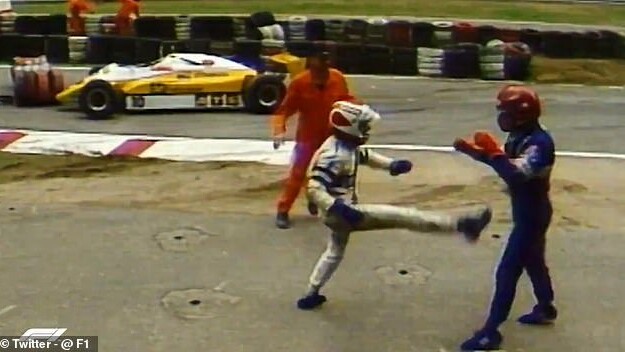 One of Formula 1's most famous punch-ups (not that there's that many of them!) happened on this day, 8 August, back in 1982.

Nelson Piquet, driving for Brabham, came up to lap the ATS driver during the German Grand Prix at Hockenheim. Going around the outside of a yielding Salazar into the Ostkurve chicane, Piquet turned in only to find the ATS hadn't slowed down enough. The two cars collided, with Piquet going off backwards into the tyre barrier with both cars coming to a stop off the track.

Climbing out, an obviously furious Piquet approached Salazar and started hitting and kicking at the Chilean driver. For added context, Piquet had acted somewhat as a mentor figure for Salazar throughout the 1970s and provided some funding during the junior driver's rise through the ranks.

Due to this friendship, Salazar didn't fight back against Piquet as the Brazilian driver made his feelings clear while they left the trackside.

Clearing the way for Tambay

It later emerged that Piquet wouldn't have made it to the end of the race anyway, as the BMW engine in his Brabham was on the verge of failure.

His dramatic retirement from the race handed the win to Ferrari's Patrick Tambay, on a weekend of misery for the Scuderia.

Following the death of Gilles Villeneuve at the wheel of a Ferrari at Zolder, Didier Pironi had assumed the mantle of team leader. However, in practice at Hockenheim, the French driver, who had taken pole position in qualifying, ploughed into the back of Alain Prost's Renault. Suffering catastrophic leg injuries, Pironi would never race in Formula 1 again.