Norris jokes about Verstappen: If I catch up with him, he'll ram me from behind

The McLaren driver has opened up on his friendship with Red Bull's Max Verstappen with Norris enjoying his time with the Dutchman on and off the track. 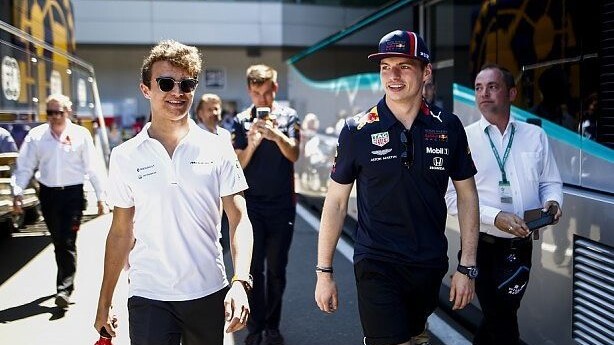 Lando Norris has revealed that Max Verstappen is one of the few drivers on the Formula 1 grid he talks to, and while they do get along they do like to make fun of each other with the McLaren man ribbing the Dutchman for an incident in Baku.

The McLaren driver scored his maiden F1 podium last year at the Austrian Grand Prix, and is hoping to battle with Verstappen and Red Bull on the track this season. Norris was asked whether Verstappen would beat him if the pair drove the same car.

"Yes, I think so, however if I catch up with him on the straight in Baku and brake, he will ram me from behind," Norris joked to Ziggo Sport, referencing the collision between Verstappen and Daniel Ricciardo in 2018 in Azerbaijan.

"Max is a character, but a good friend and one of the few drivers in F1 that I often speak to. He's actually a bit of everything, including a bit crazy, but you can laugh with him. We have fun, both on the track and off the track," Norris concluded.

Norris and Verstappen have raced together in virtual events, teaming up to win the Spa 24 Hours eSports race in 2019 and Petit Le Mans in 2020 for Team Redline.