Norris 'devastated' to miss out on Russian GP win

The McLaren driver missed out on a maiden Formula 1 victory after late rain caused mayhem at the Russian Grand Prix. 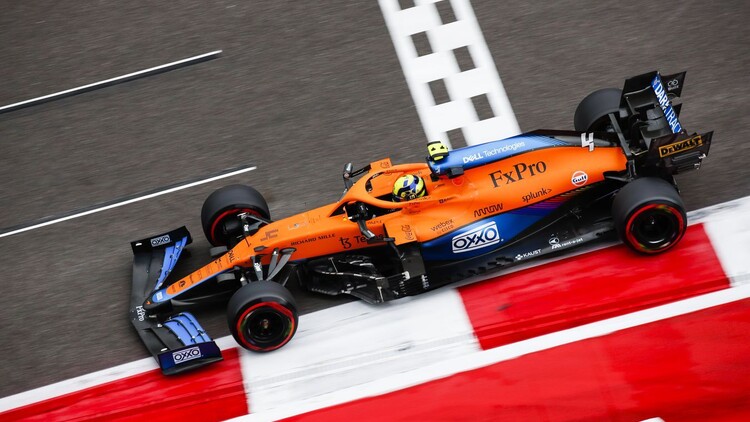 Lando Norris says he is "devastated" to miss out on his first win in Formula 1 after he made the wrong call to stay out on dry tyres when rain fell heavily at the Sochi Autodrom.

Norris was on course for victory, holding off Lewis Hamilton in the second half of the race, but rain fell with five laps to go and caused mayhem.

Hamilton was ordered by Mercedes to pit for Intermediates and did so, having initially ignored the call. Norris thought it was best to continue, which turned out to be the wrong decision, as parts of the track were hit with torrential rain.

Norris tumbled down the order and eventually finished in seventh place.

"I'm unhappy, devastated in a way," Norris told Sky Sports. "But I guess we made a call to stay out and we stand by that call.

"Of course, it was the wrong one at the end of the day, but I made a decision just as much as the the team.

"In fact, it was more that they thought I should box and I decided to stay out, so it was my decision and I thought it was the way to go."

Norris lost the lead to Carlos Sainz at the beginning of the race but retook first place on Lap 12 and pulled a 10-second lead.

He was caught by Hamilton but had the pace to keep the seven-time World Champion at bay until the rain began to fall. Hamilton went on to record his 100th F1 career win.

Norris says he feels "a bit of heartbreak" and believes the rain came at an awkward time, because there were very few laps remaining.

"I felt like I did everything I could, even when it got tricky at the end," said Norris. "I made a couple of mistakes, but still kept Lewis behind and started to pull away a little bit, so [it was] a bit of luck.

"The laps I was out before Lewis pitted, I think it was perfectly fine [with] the tyres I was on, and I got told that the rain was going to stay the same amount.

"If it was the same amount then we had the right decision, but it obviously got a lot wetter than we as a team expected, and that had us over in the end."