Lewis Hamilton believes his car is OK after colliding with the pit wall towards the end of qualifying for the Russian Grand Prix, but Mercedes will make sure that's the case. 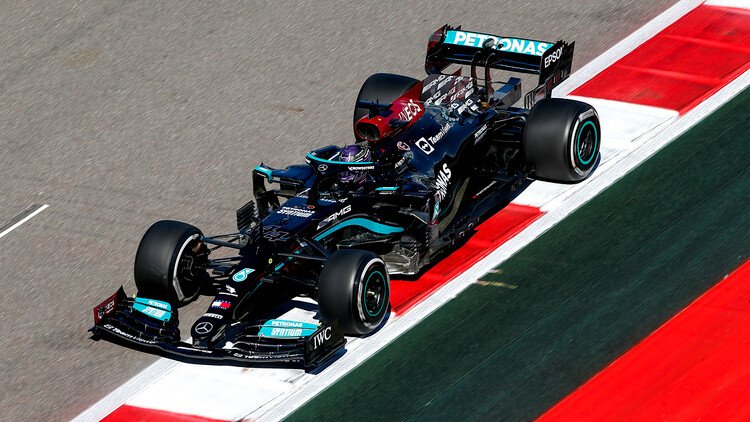 Lewis Hamilton believes his car hasn't suffered any serious damage after contact with the wall towards the end of qualifying, but Mercedes are set to check that things are OK overnight.

The seven-time World Champion will start Sunday's Russian GP from fourth on the grid after Lando Norris claimed a surprise pole position at the Sochi Autodrom, with Carlos Sainz and George Russell rounding out the top three.

Hamilton held the fastest lap heading into the closing stages of Q3, but he clipped the pit wall and damaged his front wing when coming in to switch to slick tyres, and then spun off track during his final run.

While Hamilton believes both incidents were minor in terms of damage, he says Mercedes will check things overnight to make sure that is the case.

"Just looking at both of the incidents, the pit lane one wasn't perfect, but relatively light, and the second one was super light, so the second one isn't an issue," Hamilton told RacingNews365.com and other members of the media.

"So far they're [Mercedes] saying they think it's OK, so they'll do all the checks tonight. Obviously, the car is built to withhold a lot of force through all these corners, so those little taps hopefully haven't derailed us."

Hamilton was pleased with how Mercedes handled the difficult conditions on Saturday, and while he was less thrilled by his own performance, his focus has already turned to Sunday's race.

"It's always a good time afterwards to reflect," Hamilton added.

"I think the management from the team was perfect. Of course, you could say that we could come in earlier, but neither of us felt that it was worth the risk.

"In terms of my performance, sliding and touching the wall in the pit lane was frustrating. I was most disappointed in myself because other than that, it was a really good qualifying session.

"Then they changed my tyres, and obviously had to change my wing, but I had to let Valtteri [Bottas] go. I was in the pit lane without blankets on for 64 seconds, or something like that, so I lost a huge amount of temperature in my tyres.

"Just a bunch of things, like obviously we had to let people pass, and had to keep going offline onto the wet lines. It wasn't ideal, but I definitely don't feel as terrible [as I did].

"I'm just putting all my energy towards tomorrow and just hoping that the car is OK."