A strong qualifying session from Mercedes means Lewis Hamilton and Valtteri Bottas will start the French Grand Prix race second and third. Andrew Shovlin believes that while the team have some issues to work out, a strong showing on Sunday is within reach. 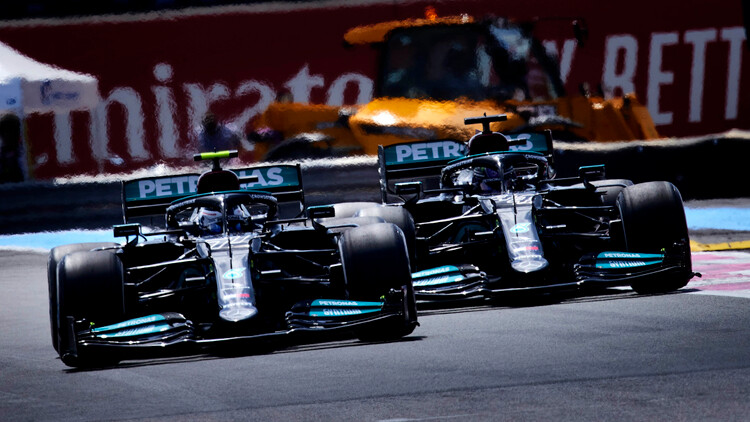 Mercedes will start Sunday's French Grand Prix from second and third on the grid, with Andrew Shovlin and Toto Wolff both stating the team are really being hampered by a lack of pace on the straights, especially from Turn 9 to Turn 11.

Lewis Hamilton will start ahead of teammate Valtteri Bottas thanks to a strong lap to end Q3. Nevertheless, Shovlin is confident Mercedes can challenge Max Verstappen, who starts on pole, given their relatively strong race pace this season.

"The early parts of the session were a bit messy as we kept getting caught in a bunch of cars on the out-lap and struggled to get the tyres in the right window," Shovlin stated via a Mercedes press release. "By the end we had good track position and we looked pretty close to Max for the first half of the lap.

"Our main issue seems to be a loss on the straight from Turn 9 down to Turn 11 and by sector three we're no longer able to gain anything back in the corners. We've seen many times this year that our race pace is better than our qualifying and we've shown that we can win races from behind so we're still optimistic that we're playing for the win tomorrow.

Red Bull were outfitted with new Honda engines in the lead-up to the French Grand Prix, with Wolff noting the new unit is no doubt helping the Milton Keynes outfit.

"The new Honda engine will have a little more horsepower," Wolff told RacingNews365.com and other members of the media. "It's pretty normal if you put a new engine into the pool.
"On the other hand, they run a rear wing that has much less drag on the straights, which in absolute lap time is good for them. For us it wouldn't function because even with their lesser downforce rear wing, they were still able to do the sector times in Sector 3 through the corners.

"For tomorrow, if it's wet it might be an advantage for us, but in the end it all comes down to having the tyres in the right window."