The battle for the 2021 World Championship has resulted in some tense moments for Lewis Hamilton and Max Verstappen but, according to Anthony Hamilton, there is no off-track rivalry between the pair. 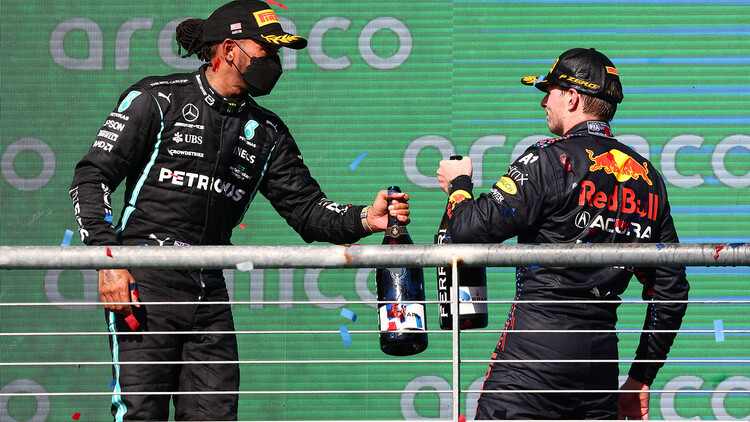 Lewis Hamilton's father has denied any suggestions that his son and Max Verstappen dislike each other, despite their on-track rivalry.

The fight for the title in 2021 has seen several close battles between the pair, including two controversial collisions at the British Grand Prix and the Italian Grand Prix.

However, Anthony Hamilton believes that this doesn't have an effect away from racing, and that Hamilton and Verstappen will still be amiable with each other by the end of the season.

When asked whether the title contenders don't like each other, Hamilton senior told talkSPORT: "No that's not true, they're fierce competitors.

"Lewis is where Max wants to be, Max is where Lewis wants to be, they're like boxers going into the ring, but I guarantee that when it's over and done there will be huge hugs and laughter and kisses between the pair of them."

Having a friendly relationship off-circuit hasn't stopped further run-ins on track between the drivers, with an incident occuring during Free Practice 2 at the United States Grand Prix which resulted in Verstappen calling Hamilton an "idiot" over team radio.

Anthony Hamilton thinks it is inevitable that competitive spirit will always win whilst racing, citing the fight between former teammates and off-track friends Lando Norris and Carlos Sainz in Austin as an example.

"It's called competition," Hamilton explained. "If you're too friendly with your competitor then you ease off the gas a little bit too much.

"You only have to look further down the field yesterday between the two McLaren drivers and the Ferrari drivers, those guys are friends.

"This is racing. When you're off the field you're very friendly, when you're in battle, all is fair in love and war."

Verstappen beat Hamilton to victory at the Circuit of the Americas, and as a result has extended his lead in the World Championship standings by 12 points with five races remaining.