Hamilton: Red Bull haven't made the most of their pace in 2021

Lewis Hamilton reckons Red Bull have had a faster car than Mercedes for most of the season. 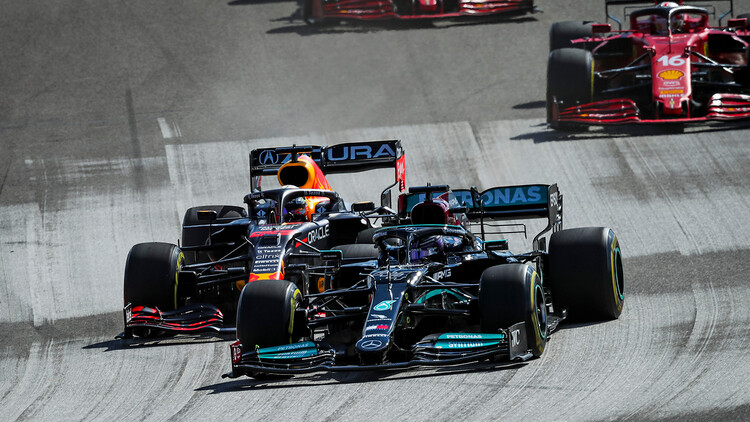 Mercedes driver Lewis Hamilton feels that Max Verstappen and Red Bull should be further ahead in both World Championship battles in 2021, given their pace throughout the season.

Hamilton is 19 points adrift of Max Verstappen with four races left to run, including this weekend's Brazilian Grand Prix, while Mercedes lead Red Bull by one point in the Constructors' standings.

Asked in an interview with Sky Sports about how he and Mercedes have managed to stay in touch with Red Bull, Hamilton said: "I think people underappreciate just how well we've done, considering the pace that they've had since day one.

"The struggles we had in [testing] before the season, just skimming by and winning the first race. Then we had a couple of races where they... I just don't think they optimised and probably made more mistakes than they'd have liked to.

"I think we've done a pretty good job, but at the end of the day we've not been as fast as them most of the time."

With Hamilton's teammate, Valtteri Bottas, mathematically out of the fight for the Drivers' title, the Briton was then asked what he is looking for from the other side of the garage to help him win the championship.

"If I'm really, really honest, I'm not thinking about me," Hamilton commented.

"I've just realised we are only one point now ahead in the Constructors' Championship, and that's the most important one, really.

"When it comes to the teammates working together, that's the one where we really need to work together to make sure we come out on top of those."

"Winning at least one championship is key"

Either way, Hamilton is determined to deliver a title for Mercedes this year, whether it's individually or collectively.

"Winning at least one of the championships is key and if we can't get the Drivers' Championship, I at least want to be able to deliver for the team and win the Constructors'," he went on to state.

"That's what I'm trying to work towards. But it's hard. And Valtteri was obviously very unlucky in the last race to get taken out by a McLaren.

"We've still got four races and I'm still hopeful that we can keep them on their toes."