The Mercedes driver believes the team pitted him too early for his second stop during the Dutch Grand Prix. 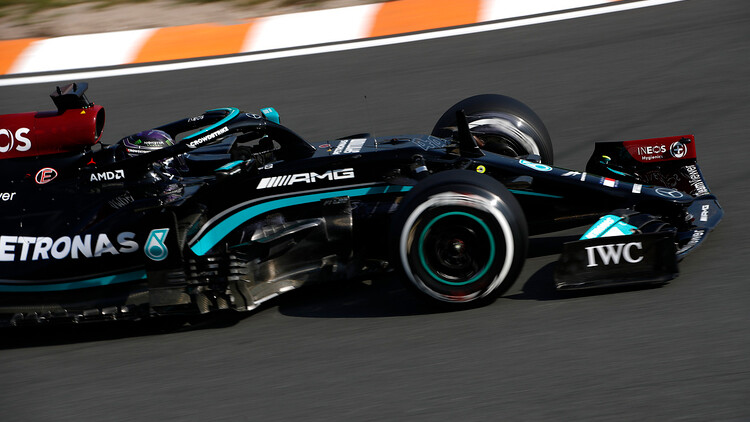 Lewis Hamilton believes Mercedes called him in for his second pit-stop too early at the Dutch Grand Prix, which potentially cost him the chance to get ahead of Max Verstappen.

Hamilton and Verstappen were both on two-stop strategies during Sunday's 72-lap race at Zandvoort but used different tyre compounds for their final stints. Mercedes put Hamilton on the Medium tyres with 32 laps to go, whilst Verstappen ran the Hard tyre compound when he pitted one lap later.

The seven-time World Champion's undercut attempt was hindered by traffic on the laps leading up to his second pit-stop, and on his out lap.

"We stopped too early in that second part and it had been a point where we [had] got through traffic," Hamilton told Sky Sports.

"I lost a good second from him [in the traffic] and I needed time to catch up and close that gap up before we did the stop.

"Then I came out behind traffic, so I couldn't actually implement and I don't know how they didn't see that. But it is what it is and we'll work through it.

"Congrats to Max, they [Red Bull] put an upgrade on at the last race and they are quick."

Hamilton was consistently within three seconds of Verstappen for the majority of the race but never within one second of the Dutchman to get DRS.

"The reason it was difficult was because I was within three seconds," said Hamilton.

"But the tyres were actually pretty good this weekend. I was flat out the whole race. There was no tyre management. I was just trying to keep as close as possible.

"[Verstappen] was faster today, they [Red Bull] were on another level that I didn't have an answer for most of the laps."