Giovinazzi set for talks with Ferrari after losing F1 seat

Antonio Giovinazzi will no longer race for Alfa Romeo after the 2021 F1 season, but the Italian remains under the Ferrari stable and hopes to have discussions with the Scuderia. 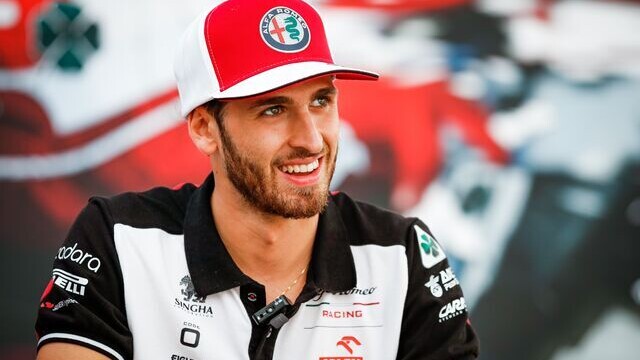 Antonio Giovinazzi will continue to have discussions with Ferrari about his future after losing his seat at Alfa Romeo for the 2022 season.

It was recently confirmed that the Italian is set to be replaced by Formula 2 driver Guanyu Zhou next year and, with every other seat on the grid taken, this means that Giovinazzi is left without a drive.

Whilst he has already secured a race seat in Formula E with the Dragon Penske Autosport team, Giovinazzi currently remains under the Ferrari stable and hopes to have further talks with the Scuderia regarding his future.

"I'm still a Ferrari driver now, and now we are discussing also about next year," Giovinazzi told media, including RacingNews365.com.

"For sure, it's one of my targets to stay here and see what will happen for 2023. [It's] still under discussion, but we will try out best."

Alfa Romeo will have a completely new line-up for 2022 in the form of Zhou and Valtteri Bottas, with Kimi Raikkonen set to retire from F1 at the end of the year.

Raikkonen - who has been teammate to Giovinazzi for three seasons - thinks it is a "shame" that the 27-year-old has been left without a seat on the grid, but hopes that he may get another opportunity in Formula 1 in the future.

"Obviously it's a shame for him," Raikkonen explained. "He's a very nice guy. We've known each other for quite a while, since the Ferrari days.

"But that's how it sometimes goes. Hopefully he'll find something good to do, and hopefully one day he has another chance to be in F1."

When asked if Giovinazzi deserves another opportunity, Raikkonen said: "Yeah sure, but there's not that many cars."

With three races remaining in the 2021 season, Giovinazzi currently has one point to his name, whilst Raikkonen is higher in the Drivers' standings on 10 points. Alfa Romeo hold ninth in the Constructors' Championship.