Mercedes' Nyck De Vries has won the Valencia E-Prix, after most of the field miscalculated their energy usage and ran out of power. 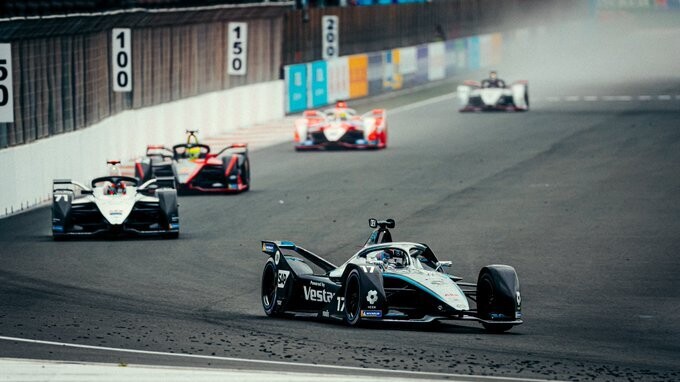 Mercedes' Nyck De Vries has taken victory in Valencia, having been one of very few cars to have enough power to finish the race.

The Dutch driver held onto sufficient power, after the final Safety Car power re-calculation prevented many of the drivers from finishing the race with enough energy left.

This meant that De Vries was able to pass Antonio Felix Da Costa, who had controlled the race from the start.

Crossing the line to take the win, Dragon's Nico Muller finished in second place, with Stoffel Vandoorne finishing third to complete the podium after starting from 24th.

Da Costa sprinted away at the start of the race, having inherited pole position from Vandoorne as the Mercedes driver picked up a penalty for using an incorrectly labelled tyre.

Da Costa's lead of 4.3 seconds was eradicated midway through the race when Max Guenther lost control at Turn 2, skating through the gravel and coming to a stop just up against the barrier.

The resulting recovery required the Safety Car deployment, meaning the second half of the race resumed with Da Costa just in front of de Vries.

The Dutch driver looked capable of passing Da Costa immediately, putting the Techeetah under serious pressure, but de Vries was told to hang back and bide his time and use the slipstream to help with energy conservation.

Twenty five minutes into the race, Jaguar's Mitch Evans and Dragon's Sergio Sette Camara both retired after a slight collision that forced Camara off into the gravel. At the same moment, Vandoorne's recovery drive was compromised as he slid off into the gravel trying to activate Attack Mode just before the Safety Car was deployed once again to cover the recovery of Camara's car.

There was another incident in the final ten minutes, with Porsche's Andre Lotterer and Venturi's Edo Mortara almost making contact, with Lotterer ending up in the gravel as a result. It was Lotterer's second major incident of the race.

This Safety Car, coupled with the resulting energy re-calculation, saw most of the drivers have their energy cut to levels that didn't seem possible to finish the race with. With Da Costa slowing starting the final lap, De Vries powered through to take the win.

A total of 19kw/h energy was taken from the cars as a result of the Safety Cars, with the calculations seeming to fail to take the open nature of the Valencia Circuit into consideration. As a result, almost all of the field failed to finish.

Click here for the results from the first Valencia E-Prix.