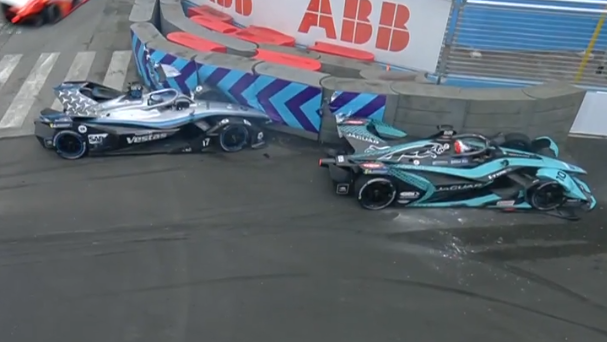 Nyck De Vries has been given a five-place grid penalty for the next round of the Formula E season in Valencia after he was judged to have been at fault for a collision in the last lap of the Rome E-Prix which took out both him and Jaguar Racing's Sam Bird.

The incident occurred just as a safety car, prompted after Audi driver Rene Rast crashed into a wall, came back in and the flags went green for the last lap of the race.

De Vries and Bird were jostling for the final points position in tenth, when coming down the straight into Turn 7 De Vries hit the Jaguar driver under braking for the tight left hander.

The collision also took out Oliver Rowland, who went on to recover in the Nissan E.Dams, but both De Vries and Bird, who was leading the drivers' championship in points going into this race, had their races ended. With penalties awarded after the race, the two would have finished in the points had they not come together.

The crash compounds a tough weekend for the Dutchman, who was also taken out of contention late in the first Rome E-Prix race of the weekend on Saturday, when he was involved in a racing incident with teammate Stoffel Vandoorne after the Audi of Lucas Di Grassi slowed down unexpectedly.

There was better news for Vandoorne however as the Belgian driver went on to win the second race of the weekend after leading from the front in another chaotic outing.