Bottas couldn't believe pit problem that forced him out

Valtteri Bottas has explained how he felt as his mechanics couldn't remove his front wheel during his pitstop, leading team boss Toto Wolff to say the Finn is 'cursed'. 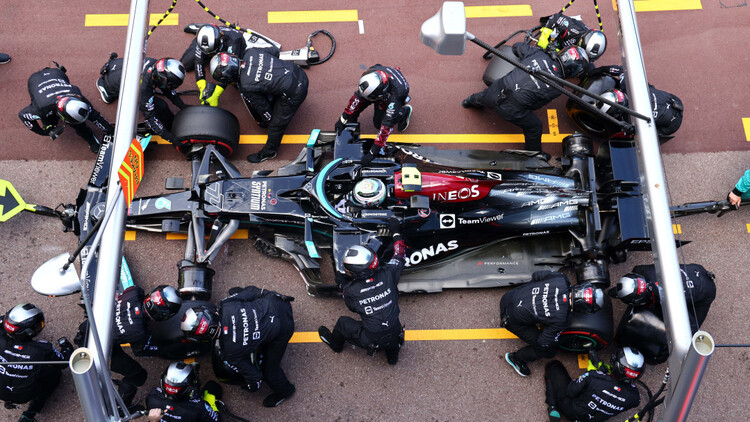 After leading the Mercedes charge all weekend, Valtteri Bottas is still unable to believe is luck at the Monaco GP when a surreal pit stop issue forced the Finn out of the race when he was running in second place.

Bottas lined up in an effective second place on the grid after the retirement of Ferrari's Charles Leclerc. Slotting in behind Red Bull's Max Verstappen, Bottas was keeping the Dutch driver under pressure until the pit stop sequence. His mechanics were unable to remove the right front wheel from the W12, as the wheel nut machined itself onto the axle, meaning Bottas was forced to retire.

"From my side, I was basically 'I know this is a slow pit stop'," Bottas told select members of the media, including RacingNews365.com

"And then I was calculating 'Ok, that's probably Sainz getting past, and then it was going to be Norris' or whoever was behind.' And then when it came down to 30 seconds or something. I couldn't believe it.

"But yes, obviously hugely disappointing and a situation that we need to make sure that it never happens again, it's a big mistake.

"It's bad luck from my side, but it's something that, as a team, it's gonna be a big priority going into the next race, as the team never had anything like that happen before."

Team boss Toto Wolff pointed out after the race that he felt luck had, once again, abandoned the Finn on a weekend where Bottas had clearly got the measure of Hamilton.

"Very, very frustrating for him because it seems like he's cursed," Wolff said. "There's nothing on the nut anymore. Valtteri said that he saw the aluminium bits flying off the front.

"It's been our weakness this year but we haven't changed any of the wheel nut designs or the guns. So we really need to get on top of what is causing that."

As for whether Bottas wonders why these issues only ever seem to affect his side of the garage, the Finn ruefully said: "Sometimes I do, but I don't know."